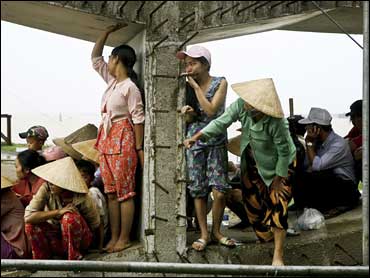 All the victims were Vietnamese construction workers laboring on a 330-foot section of the Japanese-funded bridge when it collapsed Wednesday. Eighty-seven people were injured, Ho Nghia Dung, minister of transportation, told state-owned VTV.

Rescue workers continued to search for four others believed to be in the debris, Dung said.

Hospital officials said the death toll was likely to rise as many of the victims had serious injuries.

The cause of the collapse was still under investigation. Dung said heavy rains the night before may have weakened the structure.

Twenty-nine deaths were reported from My Hoa, the village that provided the most workers, said Nguyen Van Dung, a village official.

The 1.7-mile bridge is one of the largest construction projects in Vietnam, which is scrambling to build new roads, ports and bridges to keep pace with its booming economy.

The construction work is being done by a consortium of three Japanese firms, Taisei Corp., Kajima Corp. and Nippon Steel Corp. A fourth Japanese firm, Nippon Koei-Chodai, is the chief consultant on the $218 million project, which was largely funded by the Japan Bank for International Cooperation.