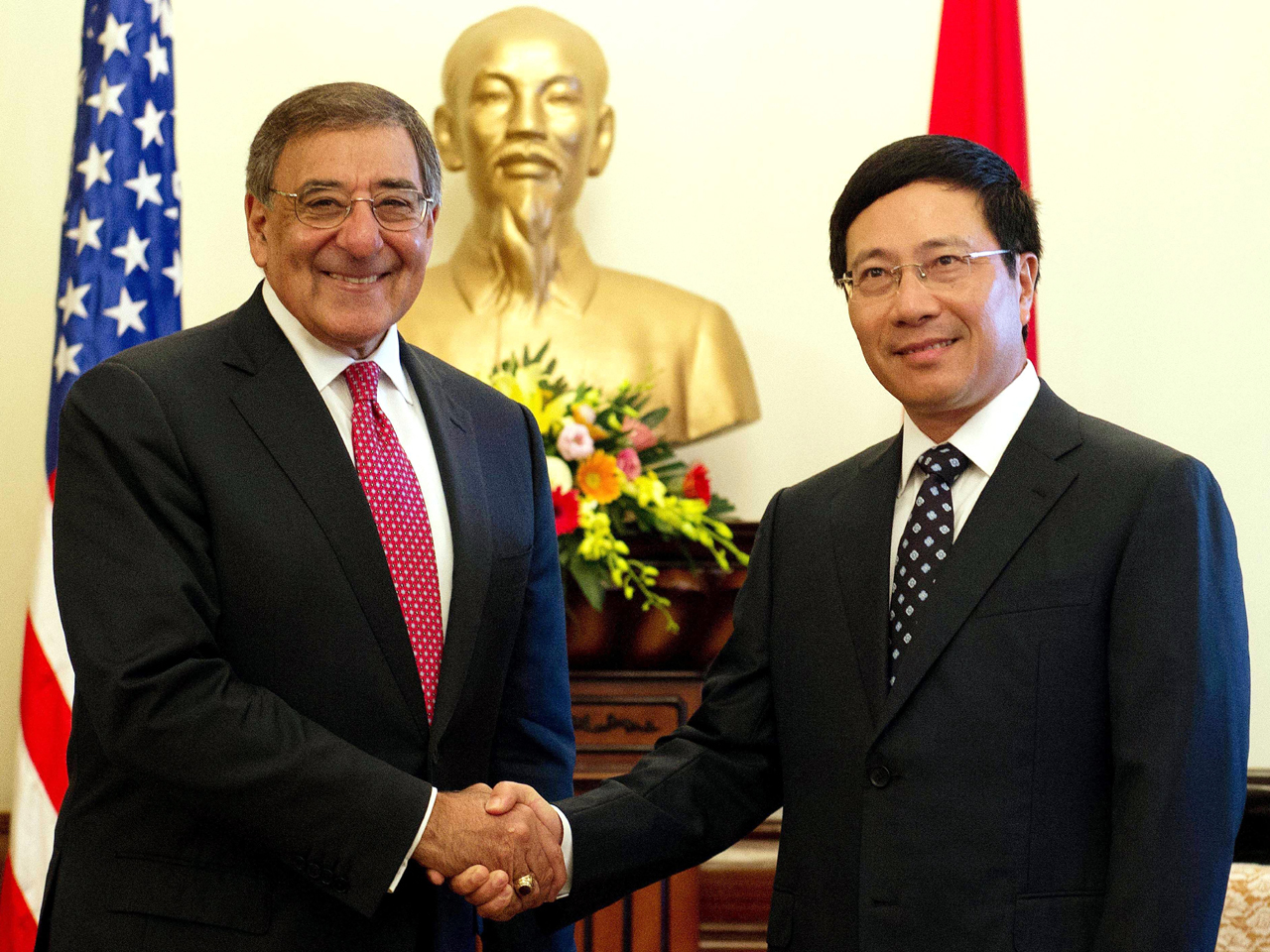 (AP) HANOI, Vietnam - The Vietnamese government on Monday agreed to open three new sites in the country for excavation by the United States to search for troop remains from the war, the minister of defense told U.S. Defense Secretary Leon Panetta during a meeting here.

The announcement came as Panetta and Vietnam Defense Minister Phung Quang Thanh exchanged long-held artifacts collected during the war — including letters written by a U.S. soldier who was killed that had been kept and used as propaganda, and a small maroon diary belonging to a Vietnamese soldier. A U.S. service member took the journal back to the U.S.

During a press briefing, where the two defense chiefs formally handed over the papers, both said their countries want to work together, whether or not the expanded relationship bothers China.

Beijing has expressed concern over America's new defense strategy that puts more focus on the Asia-Pacific region, including plans to increase the number of troops, ships and other military assets in the region.

Speaking through an interpreter, Thanh said Vietnam wants to continue defense cooperation with all countries, including stable and longstanding relationships with China and the United States. Hanoi, he said, would not sacrifice relations with one country for another.

Panetta said the U.S. goal is to help strengthen the capabilities of countries across the region.

"Frankly the most destabilizing situation would be if we had a group of weak nations and only the United States and China were major powers in this region," said Panetta.

Defense officials reviewing the packet of papers given to Panetta said it appears there are three sets of letters, including a set from the soldier, U.S. Army Sgt. Steve Flaherty, who was from Columbia, S.C. It was not clear how many other service members' letters were there, but officials were going through them Monday.

Officials said this is the first time such a joint exchange of war artifacts has occurred. The two defense leaders agreed to return the papers to the families of the deceased soldiers.

During the meeting with Panetta, Vietnamese officials said they would open the three previously restricted sites that the Pentagon believes are critical to locating troops missing in action.

Military officers briefing Panetta at the command's office said they had five to seven years to complete their excavation work. The acidic soil in Vietnam erodes bones quickly, leaving in many cases only teeth for the military teams to use to try and identify service members, one of the team members said.

In addition, many of the potential witnesses with information about remains are getting older and their memories are fading.

There are about nearly 1,300 cases that are still unaccounted for, and officers briefing Panetta said about 600 of those remains could be recoverable.

Ward said that opening the three new sites will enable the U.S. to try and find:

— Two Air Force members who were lost when their plane was shot down in Quang Binh Province in central Vietnam in 1967.

— An Army private first class who went missing when he was out with his unit on a search-and-destroy mission in 1968 in the tri-border area of Laos, Cambodia and Vietnam.

— A Marine who was on a surface-to-air combat mission and was lost when his plane went down in Quang Tri Province. Another Marine on the plane ejected and was rescued.

Flaherty, who was with the 101st Airborne, was killed in the northern section of South Vietnam in March 1969. According to defense officials, Vietnamese forces took his letters and used them in broadcasts during the war.

Vietnamese Col. Nguyen Phu Dat kept the letters, but it was not until last August, when he mentioned them in an online publication, that they started to come to light.

Early this year, Robert Destatte, a retired Defense Department employee who had worked for the POW/MIA office, noticed the online publication, and the Pentagon began to work to get the letters back to Flaherty's family.

In one of the letters, which Flaherty wrote to, "Mother," he spoke of having to leave behind the bodies of fellow troops in the heat of battle, as air strikes were called in to incinerate the area with napalm. The jets, he says, "dropped napalm and explosives that destroyed everything that was there."

"I definitely will take R&R," Flaherty continues in the letter. "I don't care where so long as I get a rest, which I need so badly, soon. I'll let you know exact date."

"If Dad calls, tell him I got too close to being dead but I'm O.K. I was real lucky. I'll write again soon."

The small diary belonged to Vu Dinh Doan, a Vietnamese soldier who was found killed in a machine gun fight, according to defense officials. Officials said that a Marine, Robert "Ira" Frazure of Walla Walla, Wash., saw the diary — with a photo and some money inside — on the chest of the dead soldier and took it back to the U.S.

The diary came to light earlier this year when the sister of a friend of Frazure's was doing research for a book and Frazure asked her help in returning the diary. The sister, Marge Scooter, brought the diary to the PBS television program History Detectives.

The show then asked the Defense and State departments to help return the diary.