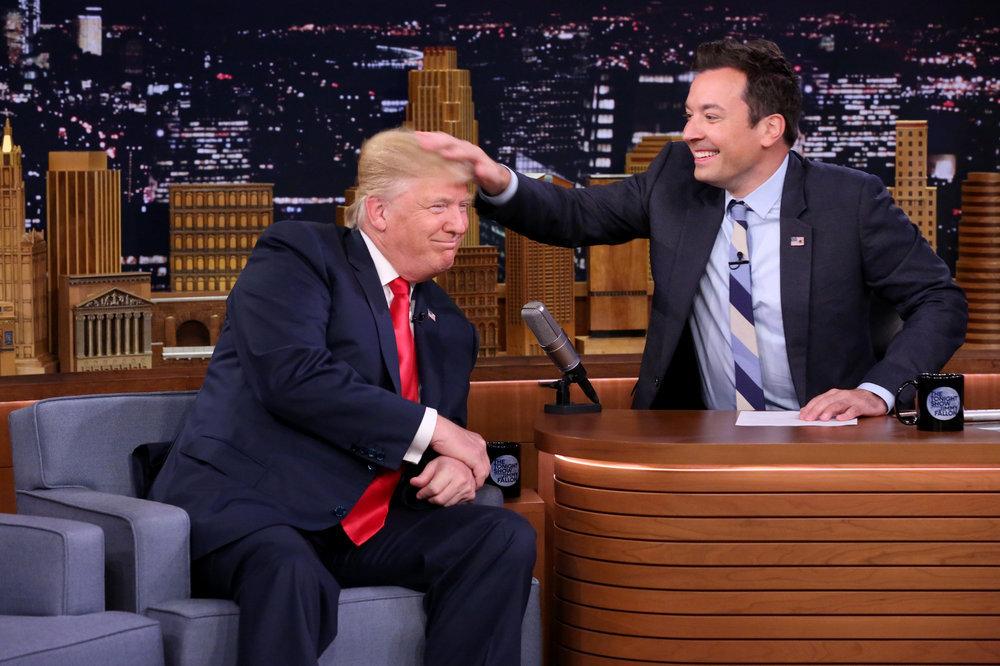 Noting that “the next time I see you, you could be the President of the United States,” Fallon proposed they do something “that’s just not presidential, really, something that we could do now that we’re both just civilians.”

“I’m not liking the sound of this,” Trump said.

“Can I mess your hair up?” Fallon asked, quickly adding, “I’ll be gentle.”

Fallon was, both with mussing up Trump’s legendary yellow ‘do and with the interview that accompanied it.

“In his defense, Jimmy Fallon just pulled in a 35 share among white supremacists 18-49,” cracked one, while another declared, “Humanizing a xenophobe is not okay.”

Yet another tweet excused Fallon for not drilling his subject as a journalist might, but faulted him “for his willingness to serve as hell’s court jester.”

For some observers, Trump’s devil-may-care guest shot may have seemed particularly jarring on Friday as he commanded blanket TV coverage for his revised verdict, after long denying it, that President Barack Obama was indeed born in the United States.

But years before the current polarizing presidential race, Fallon built his brand as a lovable, powder-puff-wielding host, no matter who his guest, politician or otherwise. No one mistakes Fallon for his slyly subversive CBS counterpart, Stephen Colbert, or Colbert’s caustic predecessor, David Letterman. Fallon’s nice-guy style has helped make him the late-night ratings leader.

Even so, The Huffington Post called Fallon’s handling of Trump “a softball interview even by softball standards.”

A GQ magazine critic called it “embarrassing” and “fawning” - “like watching a dictator be ‘fun’ on state-run TV.”