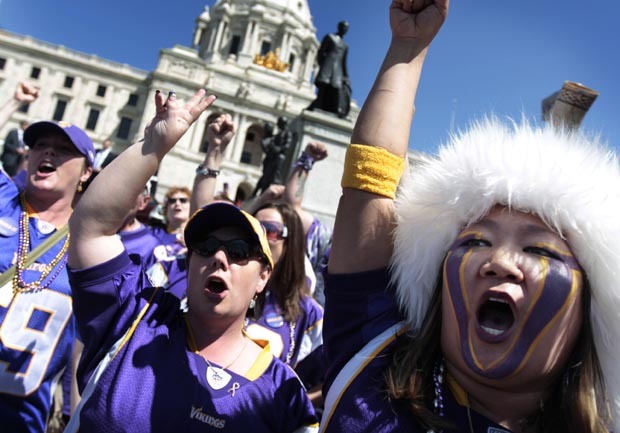 Sen. Julie Rosen, the stadium bill sponsor, proposed imposing user fees on suites, parking and Vikings merchandise as the Senate debate began, a day after a different version of the stadium bill cleared the House with votes to spare.

Rosen's amendment — adopted on a 40-26 vote — would levy a 10 percent fee on suites and on parking within a half-mile of the stadium, and impose a 6.875 percent fee on Vikings clothing, trading cards and other memorabilia.

Earlier Tuesday, a Vikings executive warned state lawmakers against making major changes to the financing proposal, saying they risked losing the team's support for the deal. Vice President Lester Bagley criticized changes made by the House when it passed the bill on Monday, particularly a provision that shifted $105 million of the cost from the state to the team. That provision isn't currently part of the Senate bill.

"People who are opposed to this are going to do all they can to muck this up," Bagley said in an interview on ESPN 1500 radio.

Bagley pointed to a bill for a new Twins ballpark that cleared the Legislature in 2002, only to fall apart later. It took the team another four years to win legislative support for a workable bill.

Bagley didn't immediately return a call from The Associated Press.

Though the Vikings have misgivings about the changes the House made to the bill, its approval Monday marked the team's first victory in its yearslong quest for a new stadium. Bagley called it "the first hurdle" in a process.

Bagley said the team's owners aren't prepared to shell out $105 million more beyond a prior $427 million private commitment toward construction of the stadium. Under a plan negotiated last winter by the governor, key lawmakers, the Minneapolis mayor and the team, the state would pay $398 million, with the money coming from an expansion of gambling. The city of Minneapolis would kick in $150 million by redirecting an existing hospitality tax.

But lawmakers will have the final say on how big a taxpayer subsidy is provided.

The bill passed the House with support of more Democrats than Republicans despite the GOP controlling that chamber. It reflects a hard push by organized labor, which has promoted the plan for a new Vikings stadium as a much-needed boost for the construction sector.

Gov. Mark Dayton hailed the vote by thanking fans who have flooded lawmakers' phone lines, email inboxes and the Capitol itself to push for passage. Several stood outside the House chamber singing the team fight song after the vote.

Dayton urged fans to keep up the pressure in the days ahead.

Many who were against the bill raised concerns that the proposed expansion to gambling would not raise sufficient money to repay bonds, putting the stadium debt in direct competition with schools, nursing homes and other valued programs that need state funds.

The amendment raising the team's share won strong bipartisan approval, but even some supporters acknowledged that it could be softened later on. Another added amendment would give the state a bigger portion of any proceeds from a team sale once the stadium is built, a guard against an owner who could cash in on an asset expected to increase the franchise value.

The Vikings are no longer under a Metrodome lease, leaving some to worry they could bolt if they don't have a new stadium after next season.

"This is your chance to prove you don't want the Vikings to leave," Rep. John Kriesel, R-Cottage Grove, said just before the vote.