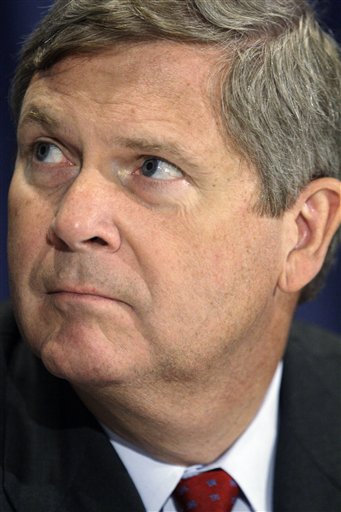 The USDA must sharpen the focus of its science and research efforts to emphasize areas where it can make an impact on society, Agriculture Secretary Tom Vilsack said Thursday.

"USDA science needs to change to respond to ... pressures, to ensure the sustainability of the American food, fuel, and fiber system and to address some of America's _ and the world's _ most intractable problems," Vilsack said, delivering a speech to launch the National Institute of Food and Agriculture.

Vilsack's speech outlined his hopes for USDA's science and research efforts, pursuits he said are strengthened by the formation of the new institute. It was created by Congress in last year's farm bill, and is aimed at enhancing the USDA's research aims by working with top scientists from around the world and taking on practical problems.

Vilsack was joined in his speech at the National Press Club by the Obama administration's appointee to run the institute, Roger N. Beachy.

Vilsack said he wants the USDA to do more work but in fewer areas and avoid overlapping with research projects by other agencies.

"I want USDA to focus most of its resources on accomplishing a few, bold outcomes," he said.

The agency's efforts in the past, he said, sometimes have been too scattershot or have duplicated efforts and research areas of other departments. He said areas where the USDA might make a real difference have been ignored, and that's something he will work to change.

Vilsack cited the example of feed stocks, where he said the USDA currently has little to no active research, despite it being an area where the agency has great interest.