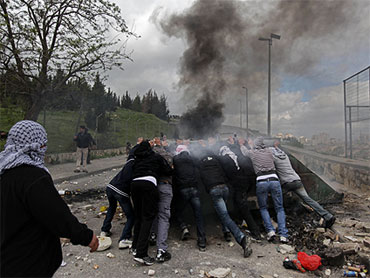 Hundreds of Palestinians in east Jerusalem set tires and garbage bins ablaze on Tuesday and hurled rocks at Israeli riot police, who responded with rubber bullets and tear gas. The heaviest clashes in months broke out as an American envoy abruptly canceled a visit, deepening a U.S.-Israeli diplomatic feud.

CBS Radio News correspondent Richard Berger reports that the violence erupted after Hamas called a "day of rage" to protest Israel's consecration of an ancient synagogue in Jerusalem's Old City.

Palestinians clashed with Israeli forces throughout the day. In one incident, youths hoisted a giant Palestinian flag and shouted, "We shall die and Palestine shall live."

Thousands of police, including anti-riot units armed with assault rifles, stun grenades and batons, were deployed across east Jerusalem in anticipation of the unrest.

"They are donkeys and dwarfs!" a woman screamed as riot police and plainclothes security men hauled away a handcuffed, hooded youth. Police pinned the youth to the ground, setting muzzled Doberman pinschers near them as the young man shrieked in panic.

Palestinian merchants in east Jerusalem shuttered their stores in solidarity with the protests, and Palestinian schools in the city were closed. Small clashes also took place in several West Bank towns.

The diplomatic dispute with the U.S. was sparked by Israel's announcement last week of plans for 1,600 apartments in east Jerusalem, which undercut a visit by Vice President Joe Biden aimed at bolstering peace talks. Palestinians claim that sector of the city for a future capital. Israel claims all of the holy city as its eternal capital.

The announcement enraged Palestinians, who have threatened to bow out of U.S.-brokered peace talks that were supposed to begin in the coming days. The Obama administration has angrily demanded that Israel call off the project.

Foreign Minister Avigdor Lieberman told Israel Radio on Tuesday that demands to halt construction "are unreasonable." He predicted the row with the U.S. would blow over.

But Washington notified Israel that its special Mideast envoy, George Mitchell, had indefinitely put off his trip to the region.

Secretary of State Hillary Rodham Clinton said Tuesday that Israel must prove it is committed to the Mideast peace process with actions, but she brushed aside suggestions U.S.-Israeli relations are in crisis and reaffirmed America's steadfast commitment to its security.

In a statement, Prime Minister Benjamin Netanyahu's spokesman Mark Regev said, "Israel's government has proved over the past year its commitment to peace, in words and in deeds," noting Netanyahu's acceptance of the creation of a Palestinian state and the "removal of hundreds of roadblocks and checkpoints" in the West Bank.

Clinton said U.S. and Israeli officials are in intense talks about how to repair the damage caused by Israel's announcement.

"We are engaged in very active consultations with the Israelis over steps that we think would demonstrate the requisite commitment to the process," she told a State Department news conference. She did not say when Mitchell would return to the region.

Netanyahu ordered his ministers and spokespeople not to talk to the media about the construction in east Jerusalem. However, Interior Minister Eli Yishai, whose office issued the order for the new homes, agreed to discuss other issues in an interview with The Associated Press.

Yishai said he hoped the tensions with the Palestinians will calm down. "The riots are not appropriate. There are people who are interested in provoking unrest and inflaming the region," he said.

He also expressed regret over the dispute with Washington and said Israel was taking unspecified "measures" to defuse the situation. But an aide poked an AP reporter in the back when he asked about the contentious construction plan, and Yishai abruptly ended the interview.

Netanyahu has apologized for the timing of the project's approval, but has not said it would be canceled.

The feud is feeding already high tension in east Jerusalem, where Jews and Palestinians live together uneasily.

Palestinian officials had called on the public to defend Muslim religious interests in Jerusalem after the rededication Monday of a historic synagogue in the Jewish quarter of the Old City. The rededication has stoked rumors that Jewish extremists are planning to take over the hilltop shrine at the crux of the Israeli-Palestinian conflict.

But the unrest appears to reflect a deeper frustration over the yearlong standstill in peace efforts.

"Jerusalem is witnessing the largest Jewish projects aimed at swallowing the city," said Hatem Abdel Qader, an adviser on Jerusalem affairs to Palestinian President Mahmoud Abbas. "This strong reaction from the Palestinian street sends a message to the Israelis that we will not accept that."

In the Gaza Strip, the Islamic militant Hamas group held a rally to protest what it claimed was an assault on Muslim holy places in Jerusalem.

"We address a message to our brothers in the West Bank: 'Go out for resistance and uprising,"' said Deputy Parliament speaker Ahmad al-Bahar.