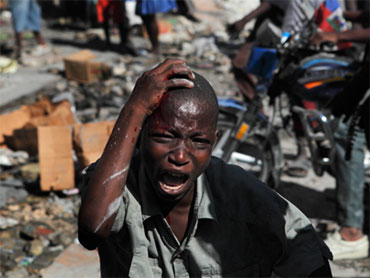 (AP Photo/Ramon Espinosa)
It looked like any other street scene in Port-au-Prince - people, by the dozens, loitering on the sidewalk, looking for work, food and hope.

A few yards from a busy intersection, a dense crowd of men formed a perfect semi-circle, as motorbikes and U.N. convoys pushed through the gridlocked streets.

At their feet lay a fresh corpse - his head turned to the left, blood seeping out of his mouth on to the sidewalk.

This young man, like so many other Haitians, was desperate. Eyewitnesses said he had tried to mount a USAID truck that was delivering rice when a Haitian police officer shot him in kidney area.

The men surrounding the body wore looks of nonchalance, as if a dead body by the side of the road were no cause for an adrenaline rush.

I arrived at the intersection before any emergency services. When a Haitian officer pulled up perhaps 10 minutes later, I pointed my video camera at him and started recording. He grabbed it and pushed it toward the ground.

I tried again to get an image of the responding officer and again he pushed my lens away, puffed his chest and gave me his best "Don't mess with me" look.

Maybe he shot the victim. Maybe it was one of his colleagues. Either way, he knew it was something to be ashamed of.