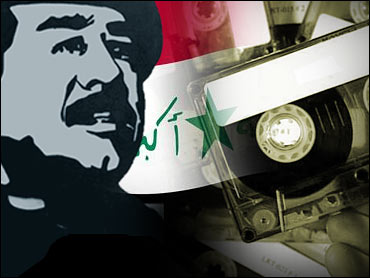 The recording of Saddam Hussein aired Friday is probably authentic, CIA officials said. But the poor quality of the recording prevents absolute certainty.

"The CIA's assessment, after a technical analysis of the tape, is that it's most likely his voice," said CIA spokesman Bill Harlow on Monday. "The exact date of the recording cannot be determined."

Intelligence officials said the recording is filled with background noise that prevents their technical analysts from being more certain.

The speaker claims the recording was made on June 14. It was aired on the Arab al-Jazeera television network July 4.

Intelligence officials said there were no references in the message that absolutely ruled out the possibility that it was prerecorded before June 14.

Still, the CIA's determination that the tape was probably authentic would further buttress most intelligence analysts' belief that Saddam survived the war, including at least two attempts aimed at killing him.

In the recording, the speaker purporting to be Saddam said he is still in Iraq and directing attacks on American forces there. He called on Iraqis to resist the U.S.-led occupation.

U.S. forces in Iraq have been targeted daily by ambushes, and dozens have died since the war's major fighting ended.

Last week, the U.S. government put a $25 million bounty on Saddam's head, and offered $15 million for each of his sons, Odai and Qusai. American officials say the mystery over Saddam's whereabouts fuels anti-U.S. attacks by his loyalists.

In the audiotape, the speaker says: "People have been asking why they haven't heard the voice of Saddam Hussein. We face a lot of trouble in getting our voice to you even though we have been trying."

The speaker defended the quick fall of Saddam's regime during the U.S.-led invasion in March and April, saying it was a necessary retreat.