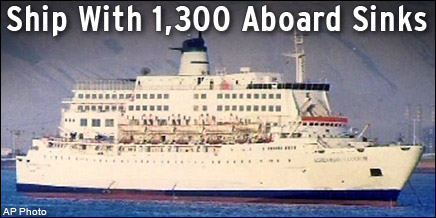 A three-month investigation by CBS This Morning Investigative Correspondent Roberta Baskin reveals an untold story of World War II. The second and third parts of her story will be broadcast on This Morning on Tuesday, Nov. 24, and Wednesday, Nov. 25. The text of some of the newly-discovered documents from the National Archives can be accessed below.

Following is the first of Roberta Baskin's reports:

While European Jews were herded into concentration camps and murdered during the second World War, many Russian and Polish Christians were abducted from their homes and taken to Germany to grease the Nazi war machine. They, too, were treated as less than human.

This summer, as we searched through previously classified war crimes documents at the National Archives in Washington, we discovered a "Kinderheim." It means "children's home." And it's a tragic chapter in an already horrific history.

In the midst of war, no one rescued the babies. With a madman in charge, their cries were ignored. They were not Jewish babies. They were not in concentration camps. These babies were the children of Russian and Polish laborers forced to work at gunpoint in German factories. Their story largely went unreported until now.

Danish historian Therkel Straede is one of the few who knows the story: "They were considered worthless," he says of the infants.

The factory that used the highest percentage of forced laborers? Volkswagen, with headquarters in central Germany in a city now known as Wolfsburg. "Volkswagen was a leader in terms of getting slave labor," Straede says, and adds:"Hitler was sort of the patron of Volkswagen, you could say."

Hitler delighted in the famous Beetle design introduced in the late '30s. He became one of the first to take one for a ride.

But when the war began, German workers went off to fight. Volkswagen asked the Nazis to replace them with thousands of foreign laborers.

But there was a problem with many of these workers. As Straede puts it, "More than half of the Polish and Russian employees, forced laborers at Volkswagen, were women." Some of those women were pregnant. Others became pregnant. The Nazis ordered that children's homes be set up to keep the foreigners' babies separate from German babies.

Life for them was grim, says Straede: "They didn't conceive of them as human beings... They were consiered sub-human... These children were not of any value."

At first, the babies were placed in a children's home near the mothers' barracks at the factory. Later, Volkswagen took the children away. The reason, says Straede, was "to prevent the mothers from spending too much time with the children and basically keep them working."

In June of 1944, Volkswagen moved its children's home eight miles down the road, away from the factory. For the mothers, it meant they could no longer breast feed or even see their babies more than once or twice a month.

For the infants, it meant they were in the care of Nazi nurses. And that became a death sentence.

Polish-born Sara Frenkel was sent to work at the children's home: "They saw children dying, and they didn't do anything about it."

Hundreds of babies were sent to the Volkswagen children's home - a home infested with bugs, raging with infections, and managed with indifference.

Frenkel recalls: "The children weren't cleaned up. They laid in their wet diapers. The children became sore. There were bacteria...bed bugs and lice... It smelled badly there."

The mothers worked 12-hour shifts and needed a police permit to see their own babies. So the babies were left to fend for themselves.

"Some would develop...these infections." says Straede, adding: "From...the bites and the bugs. This was constantly going on for months and months. Every day, somebody would die."

They knew the babies weren't taking the little milk they were given. "I picked up the bottle to check if the milk wasn't too hot." says Frenkel. "I tried some milk and realized that it was sour."

During 1945, the last year of the war, it got worse. Frenkel says she still thinks about it every day. Nearly every infant placed in the Volkswagen home died.

Dead children whose lives could have been saved, according to Frenkel:"If people took care of the children, all of them could have survived."

In all, 365 defenseless babies perishd.

Volkswagen declined This Morning's request to be interviewed on camera. They responded with a letter that calls forcing infants to be taken from their mothers: "another manifestation of the inhumanity of the Third Reich in World War II." The letter continues: "For the management and employees of the Volkswagen of today, the moral and historical lessons and obligations are clear and direct. We cannot forget the past, but we must learn from it in order that it is never repeated in the future."

The letter points out Volkswagen's multi-million dollar commitment to social projects, from schools to orphanages and homes for the aged, many in the places slave laborers once called home.

A footnote: the British tried and executed the doctor in charge. The Nazi nurse in charge was given a death sentence. Later, it was commuted. She ended up spending eight years in jail and went back to work at Volkswagen as a social worker.