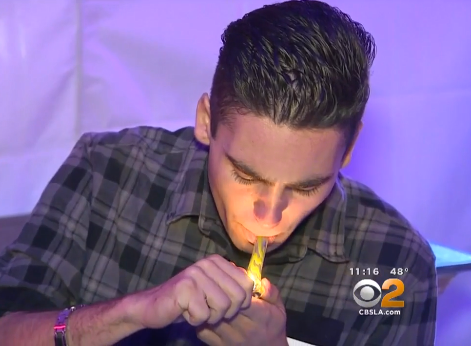 SANTA ANA, Calif. -- Even though recreational marijuana is legal in California, most people probably wouldn't be comfortable smoking around police officers. But that's exactly what Edson Villegas volunteered to do, CBS Los Angeles reports.

Villegas took part in a "green lab" to help officers, prosecutors and toxicologists identify signs of impairment as drugged driving becomes a growing problem on roads.

The volunteer users took field sobriety tests at the beginning of the evening, then went into a tent and smoked marijuana. When they went back and took the same field sobriety tests, officers could see if there were any changes in their mental or physical abilities.

"Whether it's lack of convergence in the eyes, divided attention issues, your ability to do two tasks at one time," said Duncan.

Chris Halsor -- who started running green labs like this in Colorado when marijuana became legal there -- hopes the exercises will help Californians figure out how to maintain public safety in their new environment.

"I think we have some detection tools that are out there," said Halsor, founder of Understanding Legal Marijuana. "There are a lot of questions of, do we need better tools out there? The science several is lagging behind the policy, in part because it still remains illegal federally."

The volunteers were happy to do their part, so officers know they can't judge every marijuana user the same way.

"It's different for everyone. If you're an avid user and you use it more, it's going to affect you a little bit differently," said marijuana user Sebastian Dominguez.

Like Villegas, he admits that he shouldn't get behind the wheel after smoking, and he says he doesn't.