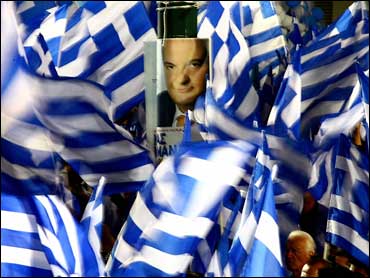 Greeks began voting Sunday in snap general elections that will determine the fate of governing conservatives, whose chances have been hurt by deadly wildfires and a challenge from the far right.

But the polls also suggested conservatives could struggle to win an overall majority in parliament, under a new electoral law that introduces greater proportional representation.

He called the snap election six months before his term expired, seeking a renewed mandate to speed up potentially unpopular financial reforms.

Campaigning, however, was halted during the last week of August as massive wildfires in southern and eastern Greece killed at least 65 people and left the government facing public anger over what some felt was a slow response to the crisis.

In the last two weeks, conservatives and socialists mounted frantic campaigns with large public election rallies in a bid to stop support slipping to smaller parties.

The far-right Popular Orthodox Rally party, or LAOS, is set to enter parliament for the first time, on a platform that includes immigration quotas and opposition to Turkey's bid to join the European Union.

Parties must receive at least 3 percent of the vote to be represented in parliament.

Karamanlis described LAOS as politically "extreme" and ruled out seeking a coalition with any opposition party if he fails to win a majority in Greece's 300-seat parliament - adding he would prefer to hold new elections.

Some 9.8 million Greeks are eligible to vote Sunday, out of an estimated population of 11.2 million, casting ballots at 20,509 polling stations in 56 electoral districts.