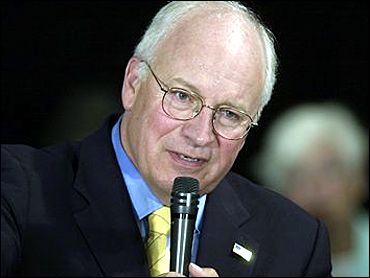 Vice President Dick Cheney argued forcefully Tuesday against an early withdrawal of U.S. forces from Iraq, saying that would be "unwise in the extreme" and increase the risk of terrorist attacks in the United States and other nations.

"The only way the terrorists can win is if we lose our nerve and abandon our mission," Cheney said at this military base in northern New York at a rally for the Army's 10th Mountain Division and the New York Army National Guard's 42nd Infantry Division.

Cheney said that withdrawing U.S. troops would be "unwise in the extreme" and "a victory for terrorists: bad for the Iraqi people and bad for the United States. To leave that country before the job is done would be to hand Iraq over to car-bombers and assassins.

"That nation would return to the rule of tyrants, become a massive source of instability in the Middle East and be a staging area for ever greater attacks against America and other civilized nations," the vice president said.

The Troy, N.Y.-based 42nd Infantry, whose commander oversaw a task force of 24,000 troops in north-central Iraq, had about 3,500 guardsmen return home in November.

The vice president's appearances, which include a rally and a sit-down with troops, are part of a series of speeches by top administration officials intended to spell out U.S. goals in Iraq more clearly in the run-up to Iraq's Dec. 15 elections to pick a permanent government.

Meanhwile, Defense Secretary Donald H. Rumsfeld says that he expects a temporary increase in violence as the election approaches but that Iraqis are making political progress despite the violence, reports CBS Radio News.

Cheney's appearances and Rumsfeld's comments come as polls show President Bush's approval rating at the lowest of his presidency: 37 percent in a recent AP-Ipsos poll, with a majority of Americans now saying the war was a mistake.

Cheney's speech also came a day after Democratic Chairman Howard Dean likened the war in Iraq to Vietnam and said, "The idea that the United States is going to win the war in Iraq is just plain wrong."

In an interview with WOAI-AM in San Antonio, Dean criticized what he called President Bush's "permanent commitment to a failed strategy" while saying, "We need to be out of there and take the targets off our troops back." Dean recalled that the strategy to stay the course in Vietnam cost thousands more lives to be lost.

"I wish the president had paid more attention to the history of Iraq before we had gotten in there," Dean said. "The idea that we're going to win this war is just plain wrong."

Asked about Dean on Tuesday, Mr. Bush dismissed the former Vermont governor as a politician trying to "score points." Mr. Bush said he knows the United States will win, and the troops need to hear that message.

"Of course, there will be some pessimists and some people playing politics with the issue," the president said. "But, by far, the vast majority of people in this country stand squarely with the men and women who wear the nation's uniform."

Meanwhile, Rep. John Murtha, D-Pa., one of the administration's harshest critics in recent weeks, charged Tuesday that the White House was trying to justify the U.S. presence in Iraq by saying it was necessary to fight terrorism, when in reality the problem was insurgents rebelling against the U.S. presence and U.S.-backed government.

In an interview on NBC's "Today" show, Murtha said that once the U.S. withdraws, the Iraqis themselves would take care of terrorist groups.

"Our military has done everything they could do," Murtha said. "The Iraqis themselves have to take care of al Qaeda. ... We'll be better off if we redeploy outside of Iraq and go back in for something that affects our allies in the region or our national security."

Cheney's words to the troops were not expected to be as biting or partisan as two speeches he made late last month, one to a Republican audience and the other to the conservative American Enterprise Institute, in which he lambasted Democratic lawmakers who voted to authorize the war in October 2002 and are now among the most outspoken war critics.

The vice president called them "dishonest and reprehensible" and "corrupt and shameless."

Cheney was one of the administration's most forceful advocates of toppling Saddam Hussein's regime before the war that has now lasted 2½ years. And he has lately been one of the most vocal defenders of Mr. Bush's appeals to stay the course in Iraq.

The latest round of speeches on Iraq began last Wednesday with Mr. Bush's address to the U.S. Naval Academy in Annapolis, Md., in which he detailed progress but gave no departure date, and the White House release of a 35-page document titled "National Strategy for Victory in Iraq."

Rumsfeld delivered an installment Monday in a speech to the Johns Hopkins School of Advanced International Studies. He criticized the news media's coverage of the war, claiming it emphasized negative stories, and said Iraqis themselves are more optimistic about their country.

About 3,100 troops from Fort Drum are currently serving in Iraq.