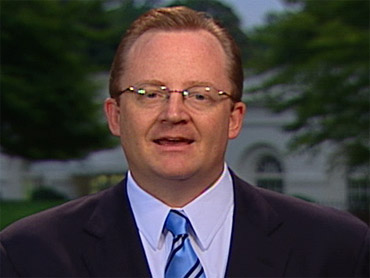 (CBS)
With more than eight months under his belt as White House Press Secretary, Robert Gibbs admits he longs for "a boring day."

By that, he means a day on which press aren't clamoring for his comments on new crises, economic collapses or political attacks from members of Congress.

"I told the President last week I hoped to wake up (to) a boring day in his administration," Gibbs confessed at his daily press briefing. "It just hasn't happened yet," he lamented.

He made the comment just as it was my turn to question him.

"You're not really waiting for a boring day, are you?" I asked.

"I am," he responded, as reporters laughed. But as Gibbs looks to the news horizon and beyond, he said "the truth is I don't see one in the future; I haven't seen one in the past."

"They don't exist," I told him. "There's always something (going on)."

Another reporter challenged Gibbs to define what he means by a "boring" day.

"Let me think about that," he said.

But we know what he meant.

As presidential spokesman he endures the definition of a burnout job. If he got paid by the e-mail or phone message from reporters, he'd make Bill Gates look impoverished.

Here's what he said in a quick overview of his 254 days so far in the White House:

"I think this has been an extraordinary eight months. What did we wake up to on the 21st of January? An economy that was sliding off the cliff; a banking system that your paper had written about that could fail; any number of international challenges. We were dealing with the Middle East peace process that first day. We were dealing with North Korea. We had Somali pirates that had taken ... Americans hostage."

And that doesn't include the 112 formal press briefings he's done, where he serves as a journalistic piñata for reporters flinging questions as if they're competing to win dinner-for-two in a round of "Stump the Spokesman."

When a reporter suggested there's been "a remarkable confluence" of events this week, Gibbs responded as if to say "so what else is new."

He said he feels that way "each and every week" he's been on the job.

The day will come, as it does to all those who have served as White House press secretaries, when Gibbs will look back with affection and amusement at the minute-to-minute mayhem that envelops the person in his job. But for now, he dreams of a boring day.