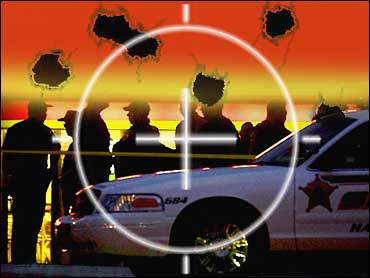 CBSNews.com's Dick Meyer lives in Washington D.C. with his wife, Jill, and their two young children. In this Against the Grain commentary, Meyer talks about the sniper's impact on his children.


From my little corner of Washington, I feel like they caught the snipers just in the nick of time.

I hope the two men the police grabbed are definitely the murderers, and that this long episode of a new kind of terror is over.

I well know that this end came far too late for the victims and for their families and friends. And I know that the fear and anger so many people around Washington have been feeling pales in comparison to their grief.

But yesterday I sensed for the first time, and I hope I'm wrong, that "the sniper" was getting to my kids in a deep way.

Maybe it was because the police released the sniper's horrific message that children weren't safe anywhere. I don't think my kids knew about that, but most of the world did.

Yesterday, parents seemed more tense, if also more angry. And for some reason, I got lots of e-mails yesterday from out-of-towners asking sniper questions and sending sympathies.

My family lives in the city of Washington, DC, not in the suburbs where all but one of the shootings occurred. My kids go to school in the city and that, ironically, used to seem like a scary thing to some people in the suburbs and the country. But the security measures our school took didn't compare to what the suburban schools had to do.

So I thought my kids and our community had really gotten off easy. And objectively we have.

Still, there has been no outdoor recess or gym at school since the first shootings in early October. Soccer games were cancelled and so were practices. The school fair was rescheduled. All the schools in the area took these measures and more. Some parents agreed, some were opposed.

But kids are resilient. My kids didn't seem to focus on "the sniper" too much. I thought it was harder on worrying parents, teachers and school administrators.

But last night when I came home from work, my sixth-grade daughter said she had just been "freaked out" when she saw a grown-up trying to play with our dog in our front yard. People do that all the time. But this time, she ran inside with the puppy.

As she was telling me this, clearly upset, her younger brother, a second-grader, said, "I think it's the sniper."

He was partly joking, razzing his sister and expressing fear all at the same time. Both kids were a little off their stride all night. They needed some explaining and some reassuring.

Explanations and reassurance are not easy commodities to peddle to smart kids who live in Washington and remember 9/11. We've tried to do the best we can. I have marveled at the teachers and administrators at our school and all the area schools; they have been so composed and thoughtful and under-appreciated.

When the kids woke up this morning, I told them the police had caught the sniper even though it hadn't been confirmed. I really hope I was right. And I hope it's reassuring.

E-mail questions, comments, complaints and ideas to
Against the Grain.