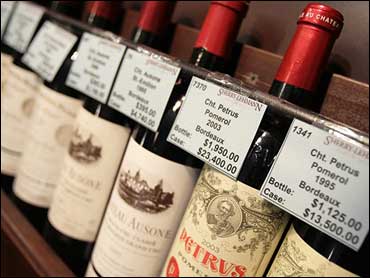 When Michael Aaron learned that Wall Street investment banks were going to be shelling out record bonuses this holiday season, the savvy wine merchant uncorked his own plan to make serious dough.

He paid for a double-page advertisement in The New York Times, boasting a rare bottle of 1995 Dom Perignon. The price tag: $14,950.

"We thought we'd put this temptation out there," said Aaron, chairman of Sherry-Lehmann wine store on Madison Avenue.

The $15,000 bottle of bubbly is just one example of how record Wall Street bonuses this year can trickle through New York City's economy. People are buying multimillion-dollar apartments. They are driving $40,000 BMWs out of the showroom.

A report released Tuesday by the state comptroller said Wall Street is expected to pay out $23.9 billion in bonuses, shattering last year's record by 17 percent.

The impact of such bonuses on the New York economy is profound.

Bonuses are expected to generate $1.6 billion in tax revenues for New York state and another $500 million for New York City. For every job created on Wall Street, three other jobs are created in the city and suburbs.

"Wall Street jobs create jobs," said Ken Bleiwas, deputy comptroller. "Why? Because they are pumping money into the economy. They're going out restaurants, they are purchasing all kinds of consumer goods."

The most jaw-dropping bonuses are being doled out by Goldman Sachs Group Inc., the world's largest investment bank. The company reported a staggering profit last week of $9.4 billion and said it was dedicating $16.5 billion for salaries, bonuses and benefits at the end of the year.

The company paid its chairman and chief executive, Lloyd Blankfein, a record $54 million for 2006, including a cash bonus of $27.3 million, according to a Tuesday filing with the Securities and Exchange Commission.

The upper echelon of Goldman Sachs — called the "golden 25" — could get at least $25 million each.

Lehman Brothers Holdings Inc., and Bear Stearns Cos. said they would pay out about $12 billion in compensation — more than $300,000 per employee.

The bonus numbers are especially mind-boggling when compared with the salaries of average New Yorkers.

The comptroller estimated that bonuses will average $137,580 in 2006, although most Wall Streeters make much more than that. Excluding people working on Wall Street, the average New Yorker earned $56,634 in 2005. Wall Street accounts for less than 5 percent of all the jobs in the city but more than 20 percent of the wages.

"When Wall Street does well, New York City and New York state do well," Comptroller Alan Hevesi said. "Wall Street bonuses are spent in the city and in surrounding suburbs on entertainment, real estate, automobiles, and other consumer goods, all of which generates jobs and tax revenues."

Real estate is a big beneficiary of bonuses, as plenty of bankers look to upgrade their digs or buy their first pad.

"A lot of my Wall Streeters have been pounding the pavement anticipating the bonuses," said Louise Phillips Forbes, of Halstead Property. "They're prepared to pay a tremendous amount of money."

Earlier this month, Forbes said she sold 11 apartments. More than half of those buyers worked on Wall Street. Forbes says she has about 200 apartments for sale ranging from $500,000 to $6 million. Many of those, she said, will go to bankers.

Forbes said the bonuses heat up the market in another way. Those who do not work on the Street try to close on new homes before those beefy bonuses arrive.

"People started buying before bonuses were even announced so they wouldn't compete with Wall Streeters," Forbes said.

"I think a lot of it is going to get masked in the fact that the sales won't close for a long time because they're in new developments," he said. "That sort of makes it hard to attribute any increase to bonuses."

Jeff Falk, president of BMW of Manhattan, has an advantage over real estate brokers.

They can't bring their wares to doorstep of the investment and banking community, but he can.

In July 2005, BMW of Manhattan opened a second showroom on Wall Street. He said his company plans for bonuses, ensuring it has enough inventory to satisfy any urges to buy a sleek BMW.

Falk said he's running an ad that says: "My bonus is faster than your bonus."

And you can't forget that Wall Street essential — the fancy suit.

"It definitely means business," said Phil Kornblatt, director of retail for Hickey Freeman, a maker of fine suits that are popular on Wall Street and routinely cost $1,500. "We noticed a big increase in sales, and I believe most of it is due to the bonuses."

Charles de Rancher, 24, works in New York for Bayern LB, a German financial institution. The conservative Frenchman says he has no intention of running out and buying a car or taking a trip to Las Vegas.

Like many young financial whizzes, Rancher is going to invest his money in a safe place, one that promises a decent return over the long haul.

"I'm sorry, I'm a pragmatic guy," he said. "The bonus goes to repayment of the principle on my new mortgage."

So far, nobody has snapped up Aaron's "Methuselah," a 6-liter bottle of champagne.

But he's hoping. Hoping some Wall Street executive with multimillion-dollar bonus buys it for a New Year's party, making it the most expensive bottle of any wine he's ever sold.

"It would be one hell of a New Year's party," Aaron said.

And one heck of a bonus for Aaron.