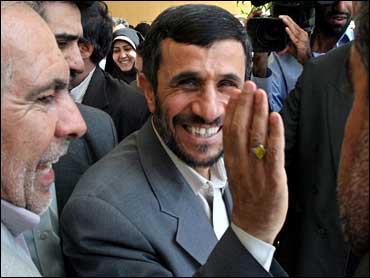 France is not drawing up military plans for a possible strike against Iran, the defense minister said Wednesday, but Iran has drawn up plans to strike Israel, should the Jewish state attack first, according to a report in the Islamic Republic.

French Defense Minister Herve Morin's statement came as a response to comments by the foreign minister earlier this week that such planning was "normal."

Morin said the military regularly draws up plans "on a series of subjects," but that France's focus with Iran was to convince Tehran diplomatically to end its contested nuclear program.

Meanwhile, the deputy commander of Iran's air force said Wednesday that plans have been drawn up for hypothetical retaliatory bombing against Israel, according to the semi-official Fars news agency.

"We have drawn up a plan to strike back at Israel with our bombers if this regime (Israel) makes a silly mistake," deputy air force chief, Gen. Mohammad Alavi was quoted as telling Fars in an interview.

Fars confirmed the quotes when contacted by The Associated Press, but would not provide a tape of the interview. The Iranian air force had no immediate comment.

For weeks there have been reports about purported plans of attack out of Washington, Tehran and Israel - almost always qualified by the "defense-only" stipulation.

All the rhetoric comes amid rising tensions in the region with the United States calling for a new round of U.N. sanctions against Iran over its disputed nuclear program, and Israeli planes have recently flown over the territory of Iran's ally, Syria.

A senior U.S. official called Wednesday for U.N. Security Council members and U.S. allies to help push for a third round of sanctions against Iran over its disputed atomic work.

U.S. Undersecretary of State Nicholas Burns said Washington was "pursuing peaceful diplomacy," and urged Iran to cooperate. However, he said the "responsibility lies with Iran to choose negotiations."

(AP Photo/Burhan Ozbilici)
"We are going ahead to try to sanction Iran again, and we hope very much to have the support of Russia and China and the other countries in the council for that," Burns, at left, told reporters in Ankara. "We have very strong support of France and Britain in this respect."

Russian Foreign Minister Sergey Lavrov on Tuesday signaled Moscow's opposition to a third round of sanctions, and praised a recent agreement between Iran and the International Atomic Energy Agency aimed at resolving outstanding issues.

"We believe that the Security Council should not be pressured to step outside the framework of support for the IAEA," Lavrov said, while warning against the use of force in Iran and against unilateral sanctions to punish Tehran for its nuclear program.

U.N. Secretary-General Ban Ki-moon urged Iran on Tuesday to cooperate fully with the IAEA, the U.N.'s nuclear agency, and the U.N. Security Council to settle the dispute over its nuclear program, saying the United Nations wants a peaceful solution.

Ban was responding to a question about French Foreign Minister Bernard Kouchner's comments Sunday that the world community must be prepared for "the worst" - the possibility of war - if the nuclear standoff continues.

Toning down that statement Wednesday on France's Canal-Plus television, Morin said: "No one can think for a single instant that we are in the process of drawing up and preparing military plans regarding Iran,". "We're not at all at that point."

"It's a subject on which we don't have specific work being done," he added.

Two U.N. resolutions imposing sanctions on Iran have failed to persuade the country to suspend uranium enrichment. Tehran insists the program is aimed at producing energy for civilian use but the U.S., its European allies and many others fear the program's real aim is to produce nuclear weapons.

Burns said he would host a meeting Friday with the participation of permanent members of the U.N. Security Council "to look at the elements of a third resolution."

Talks on a third U.N. resolution that would impose new sanctions on Iran were expected next week in New York, when world leaders will attend the annual ministerial session of the U.N. General Assembly.

"All countries should do their best ... to sanction Iran on their own according to their laws," Burns said. "I think all of us believe that a diplomatic solution is preferable and the sanctions are a very important instrument."

"The whole trend is away from commercial engagement and toward sanctions whether that's Security Council sanctions or individual sanctions," Burns said.

Burns pointed out that an energy deal signed between Iran and Turkey in July was not helpful. The preliminary deal foresees the construction of two separate pipelines to ship natural gas from the fields in Iran and neighboring Turkmenistan via Turkish territory.

"We don't think that it makes sense to announce long-term oil and gas deals at a time when Iran is going to have a nuclear weapons research," Burns said. "But again we are not singling out Turkey for criticism or attention, this is a general U.S. and West European message to many other countries."