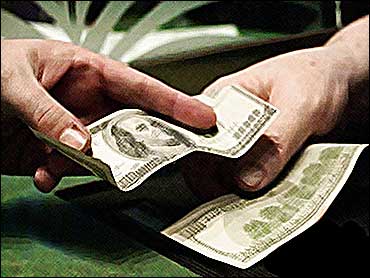 You asked for it. You've got it. We are at the beginning of the adjustment of the worldwide "imbalances" that have so troubled policymakers. The U.S. budget deficit, complained the seers, is a testimonial to the profligate ways of Congress and the president and must be eliminated now that America is on course to satisfactory growth.

Well, the deficit is coming down — and faster than even the critics anticipated. It seems that the Bush tax cuts have contributed to — note, not been solely the cause of — a spurt in tax receipts flowing from corporations and high-income individuals into the Treasury's coffers. Good news, you would think, until the mutterings start about the slowing effects on the economy of the tightening of fiscal policy.

The other imbalance that has so concerned policymakers is America's trade deficit, which, at around 7 percent of GDP, is simply "unsustainable." Great news: The trade deficit seems to be coming down in response to a falling dollar that has made it more expensive for Americans to buy foreign-made goods and services and less expensive for foreigners to buy made-in-USA products.

Or, not so great: At least if you are a Wal-Mart customer who is accustomed to feasting on Chinese goods; or an overseas exporter dependent on America's vast market for a significant portion of your sales. Suddenly, E.U. critics of the world trade "imbalance" are complaining that the falling dollar will nip Europe's nascent recovery — if that's what it is — in the bud.

Then there are those irresponsible consumers. You know, the ones wearing out their credit cards, depleting their savings, and extracting equity from their small homes in order to buy and furnish their McMansions. They must abandon their wanton ways, and save more and spend less.

Well, the latest housing figures show that they're doing just that. Home sales are down and expenditures on refurbishments are slowing. Unfortunately, this will bring down the growth rate by about one percentage point, not a tragedy in the context of America's better-than-4 percent first quarter growth, but not exactly a consequence many in the save-more crowd will find to its liking.

Then there are those soaring commodity prices, surely a harbinger of inflation, higher interest rates, and slower growth. Good news: There are signs that commodity prices are easing, with an occasional upward blip. Even the price of copper shows signs of recognizing that the road marked "price" is a two-way street. So, too, gold. But wait: This increased price volatility is unsettling. It makes it more difficult to plan investments in new mining facilities, and in user industries.

Finally, there is the Federal Reserve Board's monetary policy committee. The good news is that with the departure of the enigmatic Alan Greenspan, monetary policy will become more transparent. No more multiple-clause and sub-clause sentences to parse (usually to no effect). Big Ben Bernanke, as some in the press have come to call him, is a straight-talker, and will tell us exactly where he is going.

Well, not quite. He did hint that perhaps the Fed would pause after its 16th consecutive interest rate increase took the Fed funds rate to 5 percent. But then with equal clarity he said he might not. It all depends on incoming data. Clear, but not very helpful to the bond market, which is starting to long for the good old days when it had little idea of precisely what Greenspan was thinking and planning.

The lesson here is that the much-demanded adjustments appear to be underway and, like all economic changes, they will produce losers as well as winners. American exporters will be winners, although not huge winners, since the dollar decline will have to go further and prove more durable before buyers will make long-term purchase commitments.

Tourists planning to visit the United States this summer will also be winners, as their pounds and euros buy more dollars than they imagined would be the case when they booked their trips. The flip side of that coin, of course, is that American tourists already locked into European vacations will find them more expensive, and those who were planning such trips might have to settle for a tour of America — if they can afford the gasoline.

For firms exporting to America, the impact will depend very much on where they are located. Companies based in the European Union should be hit hardest, as the euro rises to levels not seen for a very long time. But although the Chinese have allowed their currency to appreciate against the dollar by some 6 percent, even piercing the 8 yuan-to-the-dollar psychological level, the effect on trade with China should be slight. The wage and cost gap between American and Chinese firms is just too great to be wiped out, or even dented, by a dollar decline of the magnitude we have already witnessed.

That's what has economy-watchers worried. Most experts are predicting that the current weakness of the dollar is only a small taste of what is in store for the greenback. Their consensus estimate is that a further fall of around 40 percent will be required before the U.S. trade deficit begins to come down by a meaningful amount. If that fall is gradual, the consequences should not be any more worrying than the last time the dollar took such a dip as the Reagan administration looked benignly on. But if the gradual walk down the hill becomes a drop off the cliff, the Fed will be forced to raise rates, quickly and by a lot.

That would slow the American economy by more than a little. With the world's locomotive slowed to a crawl, those foreign critics who have been saying that the American consumer must rein in his purchases, that the era of easy money must end, and that the dollar must decline will have gotten what they wished for. But they are unlikely to be breaking out the champagne to celebrate.

Irwin M. Stelzer is director of economic policy studies at the Hudson Institute, a columnist for the Sunday Times (London), a contributing editor to The Weekly Standard, and a contributing writer to The Daily Standard.