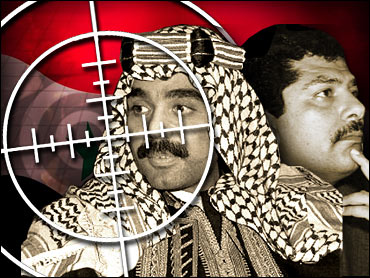 In theory, pursuing with intent to kill violates a long-standing policy banning political assassination. It was the misfortune of Saddam Hussein's sons that the Bush administration has not bothered to enforce the prohibition.

The brothers were killed during a six-hour raid Tuesday at a palatial villa in the northern Iraqi city of Mosul by U.S. forces acting on a tip from an informant. They ranked just below their father in the deposed regime. Odai, in particular, had a reputation for brutality.

Officials said people inside the villa opened fire first — but left little doubt what the U.S. troops hoped to accomplish.

"We remain focused on finding, fixing, killing or capturing all members of the high-value target list," Lt. Gen. Ricardo Sanchez, commander of coalition troops in Iraq, announcing the deaths of Odai and Qusai.

The ban has been overlooked so often in recent years that some wonder why the administration doesn't simply declare the measure null and void.

Earlier this week, the U.S. administrator for Iraq, L. Paul Bremer, stated in unusually candid terms the administration's disregard for the assassination ban.

Appearing on NBC, Bremer said U.S. officials presumed that Saddam was still alive and that American forces were trying to kill him.

"The sooner we can either kill him or capture him, the better," Bremer said. Often in the past, officials resorted to winks and nods or other circumlocutions when asked about U.S. actions that gave the appearance of homicidal intent.

Consider President Reagan's response when he was asked whether the bombing of Moammar Gadhafi's residence in 1986 constituted an effort to kill the Libyan leader.

"I don't think any of us would have shed tears if that had happened," Reagan said. Over the past five years, U.S.-sponsored assassination attempts have been on the increase. Targets have included Osama bin Laden and former Yugoslav President Slobodan Milosevic among others.

Former White House spokesman Ari Fleischer said before the start of the Iraq war that the assassination ban would not apply once hostilities broke out.

"People who are in charge of fighting the war to kill United States troops cannot assume that they will be safe," Fleischer said, making clear that Saddam would not be exempt.

Both Saddam sons held positions in the Iraqi security complex. Qusai headed an intelligence service, while Odai ran the Fedayeen militia.
Bremer says the rationale for going after Saddam now even though he is no longer in power is that he remains a rallying point for supporters.

However, the ban on assassinations, spelled out in an executive order signed by President Ford in 1976 and reinforced by Presidents Carter and Reagan, made no distinction between wartime and peacetime.

"No employee of the United States Government shall engage in, or conspire to engage in, political assassination," reads the order, number 11905, signed Feb. 18, 1976.

There are no loop holes; no matter how awful the leader, he could not be a U.S. target either directly or by a hired hand.

The advantages of using assassination as a political tool seemed less obvious a generation ago than they are today.

Ford's executive order was in response to the general revulsion over disclosures by a Senate committee about a series of overseas U.S. assassination attempts — some successful, some not — over many years.

The committee found eight attempts on the life of Cuban President Fidel Castro. Other targets included Rafael Trujillo of the Dominican Republic and Patrice Lumumba of the Congo, both in 1961; and Ngo Dinh Diem of South Vietnam in 1963. Lumumba and Diem were both assassinated, although the degree of U.S. involvement has never been clear.

One rationale for the ban was that an attempt on the life of a foreign leader could produce retaliation — a concern borne out in U.S.-Libyan tit-for-tat attacks during the late 1980's.

Libyan agents killed two U.S. soldiers at a German disco in early April 1986. Days later, Reagan authorized the bombing of Libya; Gadhafi was spared but his 15-month old daughter was killed. Libyan agents were behind the bombing of Pan Am flight 103 in 1988, killing 270, most of them Americans.

Support for the assassination ban appears to have eroded considerably after Sept. 11, 2001. The events of that day demonstrated that a small but determined group, no matter how far away, could pose a greater threat to ordinary Americans than the German Luftwaffe could in 1940.

Abraham Sofaer, a former State Department legal adviser, makes the case for pre-emption against terrorists: "If a leader…is responsible for killing Americans, and is planning to kill more Americans…it would be perfectly proper to kill him rather than to wait until more Americans were killed."

The Bush administration seems to agree, but the old assassination taboo lives on, at least on paper.

"There's an executive order that prohibits the assassination of foreign leaders, and that remains in place," a White House spokesman said just as the Iraq hostilities were about to begin.