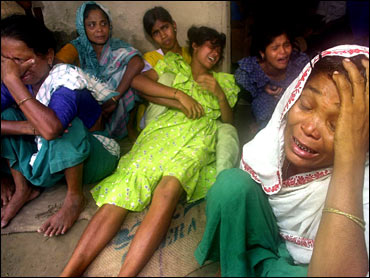 Fierce flood waters washed a rhinoceros out of a national park into a nearby village, where the disoriented beast attacked and killed a young man, in monsoon rains that have killed more than 580 people in South Asia, police and relief officials said Monday.

More than 100 of this year's deaths in India have been in Assam state, home to the Kaziranga National Park, the world's only natural habitat for the rare one-horned rhino. Several animals fleeing floods in the reserve have been killed crossing highways or by running into poachers.

A full-grown rhino, swept out of the park by rushing waters on Thursday, landed on a riverbank in the village of Ghatupara in Darrang district, about 55 miles north of the state capital, Gauhati, police said.

"A villager gathering grass was passing by the area when the rhino charged at him and killed him," on Sunday, police officer P. Dahdhora said.

Four elephants with their handlers, and 10 forest guards hunted for the rhino as a funeral procession went through the village to bury the dead man, Qutubuddin Ahmad.

The death toll from rains, flooding, disease and panicked wildlife in the annual monsoon reached 585 across South Asia, officials said.

India has reported a total of 269 deaths, Bangladesh has reported 169, Pakistan 78, and Nepal 69, indicating that this year's casualties could be higher than usual. Last year, even with sparse and late monsoons in India, the death toll for all of South Asia was 1,000, with 25 million affected by the time the rains stopped in late August.

Four people, including two children, were driving in a tractor-towed farm cart when it fell Sunday into an overflowing drain near Jaipur, the capital district of India's Rajasthan state, the Press Trust of India said. Seven others on the cart were rescued by local villagers, PTI quoted police as saying of the incident Sunday. Elsewhere in the state, a teenage boy drowned in a canal, while lightning killed an old man.

Bhumidhar Barman, health minister in Assam, of which Gauhati is the capital, said 82 people had died of malaria in the northeastern state in the past two months and five of diarrhea in the past week.

Overflowing rivers in Assam have washed many people out of their homes, leaving them prey to insects, while floodwaters have polluted drinking water wells, increasing the cases of waterborne disease. A further 22 had died of drowning, he said.

Nearly 5 million people in almost 5,000 villages spread over 22 of Assam's 24 districts have been affected by the floods.

In eastern Bihar state, river levels appeared to be receding Monday as the strength of the downpours subsided. The flooding in Bihar has killed 13 people, but affected some 900,000 and destroyed $130,000 worth of crops, the state's Relief and Rehabilitation Department said Monday.