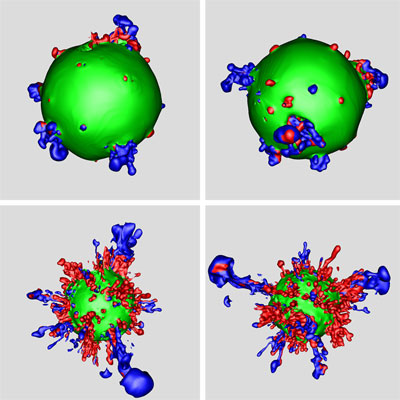 Ever wonder just what happens when a star explodes? No, we don't mean Sean Penn punching the paparazzi. We're talking about what goes on when those stars you wish upon die in gigantic, eye-popping explosions called supernovae that happen once every 50 years or so in a galaxy the size of the Milky Way.

Researchers have created a 3D computer model chronicling just such a rare happening--noteworthy because the mechanics of the blasts are so complex that scientists have so far been able to simulate only parts of them, and only in one or two dimensions.

The computer models by researchers from the Max Planck Institute for Astrophysics in Garching, Germany, and elsewhere follow an exploding star from milliseconds after the start of the blast in the core through the star's demise several hours later, when the shock wave breaks out of the stellar surface like a creature bursting from a stomach in "Alien."

Specifically, the scientists observed the workings of the often-studied SN 1987A, a core-collapsing supernova discovered in 1987 that originated in the Tarantula Nebula of the Large Magellanic Cloud.

Core-collapsing supernovae occur when a star with at least nine times the mass of the sun burns almost all of its fuel and the fusion engine in the center begins to malfunction, triggering a core implosion and then a violent explosion of the whole star. The ability to detail SN 1987A in three dimensions has yielded new insights into factors like the true velocity of metal-rich clumps of matter shooting from the star's center outward during a blast.

The scientists also noted the way such iron and nickel "bullets" expand and overtake the hydrogen shell of the disrupted star on their way out, contributing to the supernova's brightness, or so-called light curve.

"We found substantial deviations in our 3D models compared to previous work in 2D, especially the growth of instabilities and the propagation of [metal] clumps," says Nicolay Hammer, the lead author of the research paper, which is published in an upcoming issue of Astrophysical Journal. "These are not just minor variations; this effect determines the long-time evolution and ultimately the extent of mixing and observable appearance of core-collapse supernovae."

Space geeks will want to take a closer look at the research for more nitty-gritty on how stellar explosions start and progress. For those who don't care much about the whys and wherefores, the 3D images still make for pretty cool desktop wallpaper.

Madeleine McCann disappearance: Was a monster hiding in plain sight at a vacation resort?

An inside look at the investigation into Christian Brueckner, the new suspect in the disappearance of Madeleine McCann.

Madeleine McCann disappearance: Was a monster hiding in plain sight at a vacation resort?

An inside look at the investigation into Christian Brueckner, the new suspect in the disappearance of Madeleine McCann.