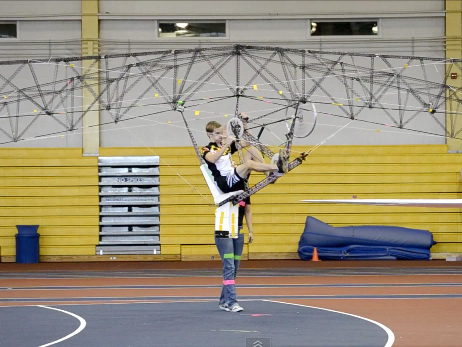 (CBS News) A team from the University of Maryland has created an amazing contraption that allows for some high-flying fun using the medium of "human powered helicopter" flight. Phew, try saying that a few times in a row! And then watch the insanely awesome video above.

The fascinating and bizarre demonstration was posted by YouTube user TeamGameraHPH who write:

Team Gamera is back and flight testing their modified version of Gamera II Human Powered Helicopter at the PG Sports and Learning Complex in Landover, MD.

With new pilot and incoming UMD Freshman Henry Enerson in the cockpit, a maximum altitude test flight was attempted. Needless to say we were not quite expecting what happened next. Henry smoothly pedaled Gamera up to just over 8 feet (2.5 meters) altitude and had a controlled descent for a flight time of about 25 seconds. This is not an "official" record but is certainly the highest a human powered helicopter has ever reached.

Our goals are to continue flight testing to achieve a 3 meter (10 ft) altitude as part of the AHS Igor I. Sikorsky Human Powered Helicopter Competition ('The Sikorsky Prize'). Stay tuned to this youtube channel as more historic flights are achieved and posted!

Okay, so maybe the term "high-flying fun" is still too early for use, but there is no doubt that this technology should win an achievement award for awesome (that's an award, right?) and has definitely just earned a major triple-rainbow salute of excellence from us here at The Feed. To learn more about Team Gamera and their project, you can visit their website by clicking here.