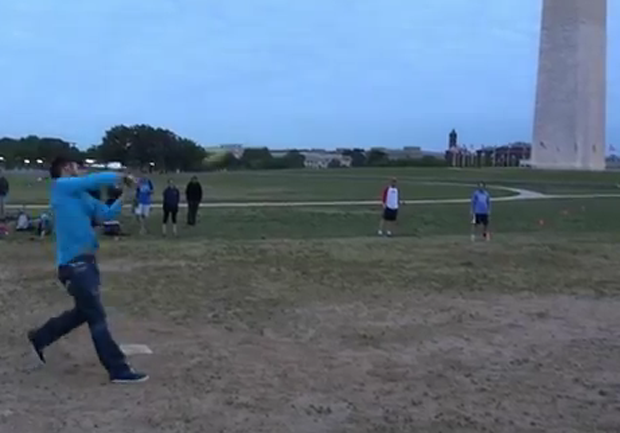 (CBS News) It would be an understatement to say that Washington Nationals hitting sensation Bryce Harper rubbed some people the wrong way in the minor leagues. (Blowing a kiss to a pitcher after taking him deep will do that.)

But now the rookie phenom is in the big leagues (at least temporarily) and he's doing a pretty nice job of repairing his image. During his debut at Dodger Stadium, he seemed genuinely humble and awed. And now back in D.C., he made a cameo appearance at a softball game on the National Mall.

Per the Washington Post, Harper and a guy with a video camera walked up to a game Monday between two nonprofit powerhouses: the World Wildlife Fund Fighting Pandas and the Alliance to Save Energy Killer Watts. Harper was invited to take a swing for the Killer Watts and, as you can see in the video above, he whiffed at a pitch before lofting one to right field.

Harper makes his home debut tonight not far from the Washington Monument fields as the Nationals host the Diamondbacks. So far, the 19-year-old is 2 for 6 with one RBI in the big leagues after two games.