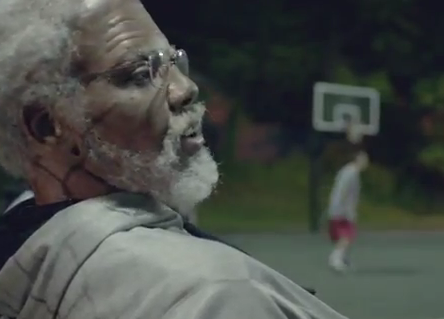 (CBS News) Cleveland Cavaliers star Kyrie Irving may be the newly crowned NBA Rookie of the Year but the 20-year-old is also pretty good at playing a basketball curmudgeon.

Check out this latest bit of slick viral advertising, in which Pepsi Max introduces us to "Uncle Drew" - who is actually Irving in disguise. Lamenting the modern age of style-over-substance basketball and "flashy shoes," Drew visits a court in Bloomfield, N.J. to shoot a fake documentary. But when the gray-haired hoops aficionado comes onto the court to replace an injured player, the real game begins.

Irving, who grew up in New Jersey, is clearly having fun in the role. After shuffling around the court and shooting air balls, he gradually starts dominating the game - swishing three pointers and throwing down a few dunks. The video already has more than 2 million views and counting.

Of course, we've seen these choreographed athlete-anchored videosbefore and we've seen a guy named LeBron put on the senior makeup to sell a product. But Irving has considerably less baggage than King James and he does a stellar job displaying both his hoops and acting skills. The Cavs point guard, who wrote and directed the segment, may be taking his talents to Hollywood when his playing days are over.