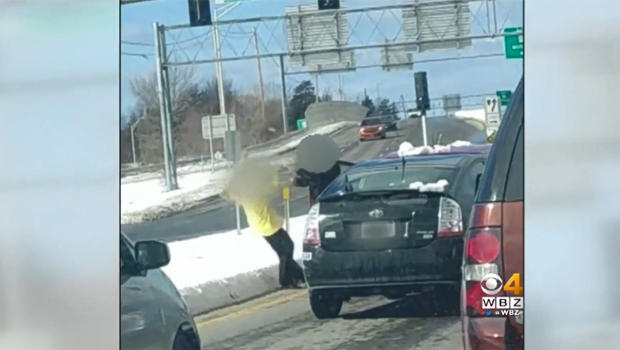 NASHUA, N.H. -- A woman was pushed into the snow in an apparent case of road rage Sunday -- and it was caught on video, reports CBS Boston. "People are insane nowadays," said Jennifer Needham, who can't believe what she witnessed - and recorded.

She called the whole incident "unreal."

Needham started recording when she heard beeping and yelling at an intersection in Nashua.

"You see her get out of her car. Storm up to his car," Needham said. "That's when he got out and shoved her to the ground. I was just shocked."

Jennifer's boyfriend kept driving, trying to shield her young kids from what was happening.

"You just don't see that every day," Needham said. "You just kind of pause and, later on, wish you had done something differently."

Needham says she can't get the image of the woman on the ground out of her mind.

"It would be pretty hard to explain to my almost six-year-old, 'Yeah, you know, a man shoved a woman because he was angry,"' Needham said. "If he's willing to do that in front of that many people, I'm not one to speak for people, but I can only imagine what he oould do in another situation."

Nashua Police have identified both drivers and are interviewing witnesses, but no charges have been filed.