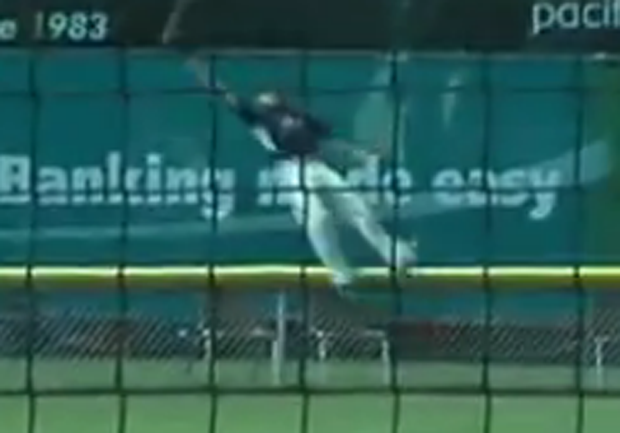 (CBS News) Two years ago we witnessed Masato Akamatsu make an unbelievable "Spider-Man" catch over the wall to steal a home run ball in Japan.

Now we have a "Superman" catch for the ages in Washington state.

Check out the amazing grab above. That's Lower Columbia College Red Devils outfielder Derrick Salberg leaping over the fence to make an unbelievable game-ending catch against Everett. The jaw-dropping play not only robbed Everett's Keone Kela of a two-run home run, it preserved the Red Devils' 4-2 victory in the opening round of the NWAACC tournament.

Not surprisingly the play claimed the No. 1 spot on SportsCenter's countdown of the top 10 plays.

Salberg later told ESPN.com that he had never done "anything like that" before on the baseball field.

"I've made diving catches in a cap before, but nothing coming close to this," he said.