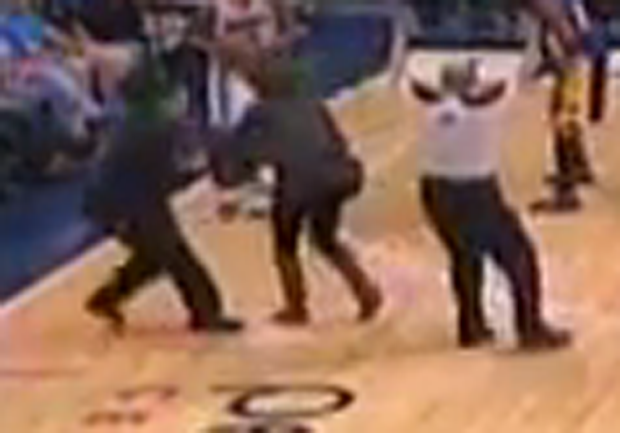 (CBS/AP) The playoff game between the Los Angeles Lakers and Denver Nuggets was briefly interrupted when a 20-year-old female fan walked out on the court in the second quarter Sunday night.

The woman, identified by police as Savannah McMillan-Christmas of Denver, walked several steps onto the court as Nuggets point guard Ty Lawson brought the ball past half-court. Officials blew the whistle to stop play with 1:10 left and McMillan-Christmas was escorted away by security.

McMillan-Christmas was arrested for investigation of trespassing and taken to a detention facility for booking, said Denver police Det. Todd Erickson, part of the security detail at Pepsi Center.

The TNT broadcast, citing arena security sources, reported that the woman had a history of "stalking or following several players" and that she was "basically banned from the arena" for those incidents.

Erickson said he was at his post near the Denver bench when he spotted McMillan-Christmas stepping onto the floor near mid-court in front of startled Nuggets guard Andre Miller.

"I happened to see her walk on to the court and I thought, `Uh, oh,"' Erickson said.

He hustled over to her and, with other security personnel, told her she had to go back to her seat.

Kurt Schwartzkopf, chief marketing officer at the Pepsi Center, said the woman did not appear intoxicated, but was disoriented, the Denver Post reported.