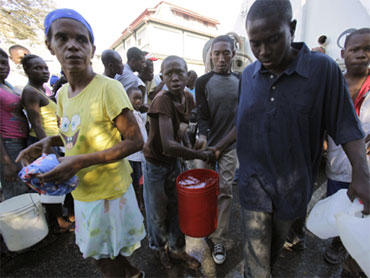 Hundreds of thousands of Haitians are in desperate need of drinking water because of an earthquake-damaged municipal pipeline and truck drivers either unable or unwilling to deliver their cargo.

"Many drivers are afraid of being attacked if they go out, some drivers are still missing in the disaster, and others are out there searching for missing relatives," said Dudu Jean, a 30-year-old driver who was attacked Friday when he drove into the capital's sprawling Cite Soleil slum.

The lack of water has become one of the greatest dangers facing Haitians in part because earthquake survivors stay outdoors all day in the heat out of fear of aftershocks and unstable buildings. While aid has started to pour in from around the world, supplies are not quickly reaching all who need them.

Even before Tuesday's quake, the municipal system in this city of 3 million people was unreliable. Haiti's poorest live in shacks with no plumbing and carry their water home in jugs from public wells. Most people depend on water delivered by truckers, who get their water with the help of diesel pumps that draw from a huge underground natural reservoir.

"There's no shortage of water, the water's here, the trucks are here as you see," said Jean, who said his attackers let him go unharmed after they recognized him.

Since the quake, at least one water treatment plant was shuttered because of a lack of electricity. Pipes for the municipal water system are believed damaged.

No water is running in Cite Soleil, home to more than a million people.

Adding to the problem is that stores that have water and food to sell are not opening out of fear of violence.

Tom Osbeck, a missionary from Indiana whose Protestant-run Jesus in Haiti Ministry operates a school just north of Port-au-Prince, said a scarcity of drinking water and food is fraying the nerves of increasingly despairing survivors.

"Even distributing food or water is very dangerous. People are desperate and will fight to death for a cup of water," Osbeck said Friday from his home about 5 miles from the center of the quake.

Aid groups, businesses and governments from around the world are scrambling to meet the need.

Oxfam had water supplies in Haiti left over from a 2008 storm and has managed to get some 2,000 and 5,000-liter tanks into the capital city. U.S. military officials say helicopters are ferrying in water and other supplies from the USS Carl Vinson. Procter & Gamble Co. is sending 3 million water-purifying packets along with cash donations for earthquake relief.

Rebecca Gustafson, part of the disaster assistance team of USAID, said international agencies are assessing the best places for community water treatment centers. She said much of the focus of international aid for now is on rescue and recovery efforts.

"Once that wave subsides, in the coming days you'll see more and more aid coming in," she said.

While government agencies and troops worked to move supplies out of the jammed airport, some Haitians and far smaller organizations worked on their own to get aid to thirsty, hungry people.

Milero Cedamou, the 33-year-old owner of a small water delivery company, twice drove his small tanker truck 10 miles outside Port-au-Prince, paying $25 for each fill-up and then returned to a tent camp where thousands of homeless people were living.

"This is a crisis of unspeakable magnitude, it's normal for every Haitian to help," Cedamou said. "This is not charity."

Jean Ponce, a 36-year-old mason, was among 200 people holding plastic buckets who clustered around the truck - emblazoned with the slogan "Wait for God" on its side - when it returned. He lost one of his children in the quake and said the bucketful he collected would be the first drinkable water his four surviving children tasted since the disaster struck.