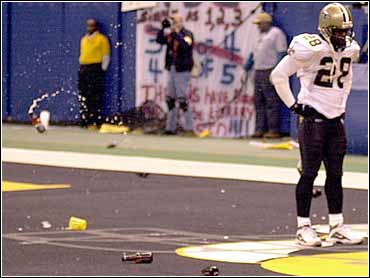 Fans of the St. Louis Rams will have to go without bottled beer at home games for the rest of the season - and bottled soda and water could also be banned.

That's according to the St. Louis Post-Dispatch.

"It's all about safety," Bob Wallace, the Rams' senior vice president for administration, told the newspaper. "These bottles can hurt someone seriously, especially little kids."

On Sunday, fans interrupted an NFL game in Cleveland by throwing objects, including partially filled plastic beer bottles, onto the field. The same thing happened in New Orleans Monday night during the Rams' 34-21 win against the Saints.

Both times, the fans were unhappy with officials' calls.

Most of the objects thrown onto the field in both cases were plastic beer bottles, Wallace said, although there were a few bottles containing water or soda. Wallace said the club will decide by Dec. 30 - the date of the team's next home game - if the dome's concessionaire will also continue to sell plastic bottles of water and soda.

Miller Lite in plastic bottles makes up just 2 percent of beer sales at the Dome at America's Center; the local Budweiser brands sold only in paper cups dominate.

Fans who make the trip to this weekend's game between the Rams and the Carolina Panthers in Charlotte will, however, be able to buy beer in plastic bottles. Panthers spokesman Bruce Speight said the team feels it has enough security in place since Sept. 11 to handle any trouble.

A spokeswoman for the St. Louis Cardinals said the team is reviewing its policy on bottled beer, but doesn't plan to make a decision anytime soon. The St. Louis Blues don't sell beer in bottles at the Savvis Center, said spokeswoman Cindy Underwood.

As for bottled water, she told the Post-Dispatch, "I think there is a difference between beer and water."