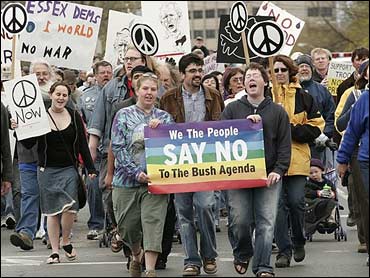 
For several weeks in a row there have been headlines like "Bush Approval Rating Hits New Low." This week, it was CNN's turn to break the news, with a poll showing just 32 percent who like the president's performance and 60 percent who do not.

Poll numbers like this give Democrats hope. In fact, most Democratic hopes lately have come from their opponents' vices and not their own virtues.

November will be the last time that voters can punish George Bush and I expect they will. I think that, however, is close to the limit of Democratic hopes for the medium-term future. Their progress will be determined by Republican regress.

My hunch is that Democrats will capture House and Senate seats but not the House or Senate. And if they do, the victory will be fleeting and they will do poorly in 2008.

That's a hunch, no more, and I admit it. But I felt it as a certainty when I read a column by The Washington Post's E.J. Dionne this week. Dionne was arguing with a fellow liberal who wrote what the Democrats need to do is destroy today's "radical individualism" and replace it with "a politics of a "common good." That's fine, Dionne said, but we need to hear "more about self-interest, rightly understood."

That phrase made me cringe. It still does.

"Self-interest, rightly understood" is a fancy-pants way of saying, "I know what is in your interest better than you do." It is, in my view, a politically stupid and morally diseased position. Democrats, by temperament, are slightly more susceptible to it than Republicans.

I do not mean to condemn Dionne for a phrase. But I will. It reminded me of something written on the very first page of a book that lots of Democrats think is absolutely brilliant, "What's the Matter with Kansas" by Thomas Frank.

In the third paragraph of his book, Frank writes: "People getting their fundamental interests wrong is what American political life is all about." That, too, is a fancy-pants way of saying: "I know what is in your interest better than you do."

Frank spends the rest of his book explaining why the people of Kansas go against their obvious self-interest and vote for Republicans and not Democrats. His explanations are fascinating and interesting. His premise is intellectually totalitarian.

That may strike you as a rather extreme denunciation. It is, so I'll explain why, in my view, thinking that you know what is in other people's best interests is perhaps the worst political impulse that good people commonly have.

Actually, that is an easy task because it has already been done for the ages and to perfection by the British historian and essayist Isaiah Berlin. In 1958, he delivered a talk he entitled "Two Concepts of Liberty." It became one of the most influential essays in political philosophy written in English in the 20th century.

Positive liberty takes a dim view of simple negative liberty, arguing that it is meaningless unless a person has a real, positive freedom - the power "to do" vital things. Being left alone, in the world view, is meaningless if you don't have the power "to do" the important things, whatever they may be – get an education, earn a fair wage, live in an alienated society.

Negative liberty is the ethos of classic liberalism, not 'liberalism' in the partisan sense that the word is typically used in America today. Its essence is, "I know what's best for me, leave me alone."

Positive liberty, according to Berlin, is the ethos of idealism and great political dreams. Not content with "leave me alone liberalism," the positive libertarian thinks people must have the power to do and be certain things in order to be free in "meaningful" ways.

What are those things? Well, they are not things you can know for yourself in your zone of liberty. They are things that were well-understood by great minds like Hegel, Rousseau and Marx. The great impulse of positive liberty is: "I know what is best for you."

That impulse, in history and in personality, is elitist and, at its worst, totalitarian. It is the impulse that allows Marxists, Communists, theocrats and nationalists to curtail negative liberties and slaughter people – all in the name of their own best interests.

America, of course, is the model community of negative liberty. It's a country explicitly founded on its principles. Arguments about the exact frontiers of liberty will be infinitely and ferociously debated.

The American political temperament, I think, has been molded over the centuries to have an uncanny ability to sniff out and reject the personality, if not the precise policies, of positive liberty – and its voice, which says: "I know what's best for you."

Both political parties have impulses in both directions.

Republican policies that echo the voices of positive liberty include public religiosity, laws to have the state and not individuals control abortion, No Child Left Behind and the conquering of Iraq in the name of bringing Iraqis the freedom they didn't know they wanted.

Democrats are more likely to want to regulate what you eat and drink, dismiss the property rights that are infringed by taxation, declare that economic goals are rights or entitlements, and try to legislate more economic equality.

As the quotes from Thomas Frank and E.J. Dionne show, a defining impulse or attitude of many Democrats and liberals today is that Americans, because of evil manipulations by Republicans, do not know what is best for them and the party's job is to show them the light.

That is a temperament, and one which is not easily discernible in policy papers and campaign platforms. But voters can smell it a mile away. And lately, they think it stinks.

Dick Meyer is the Editorial Director of CBSNews.com.