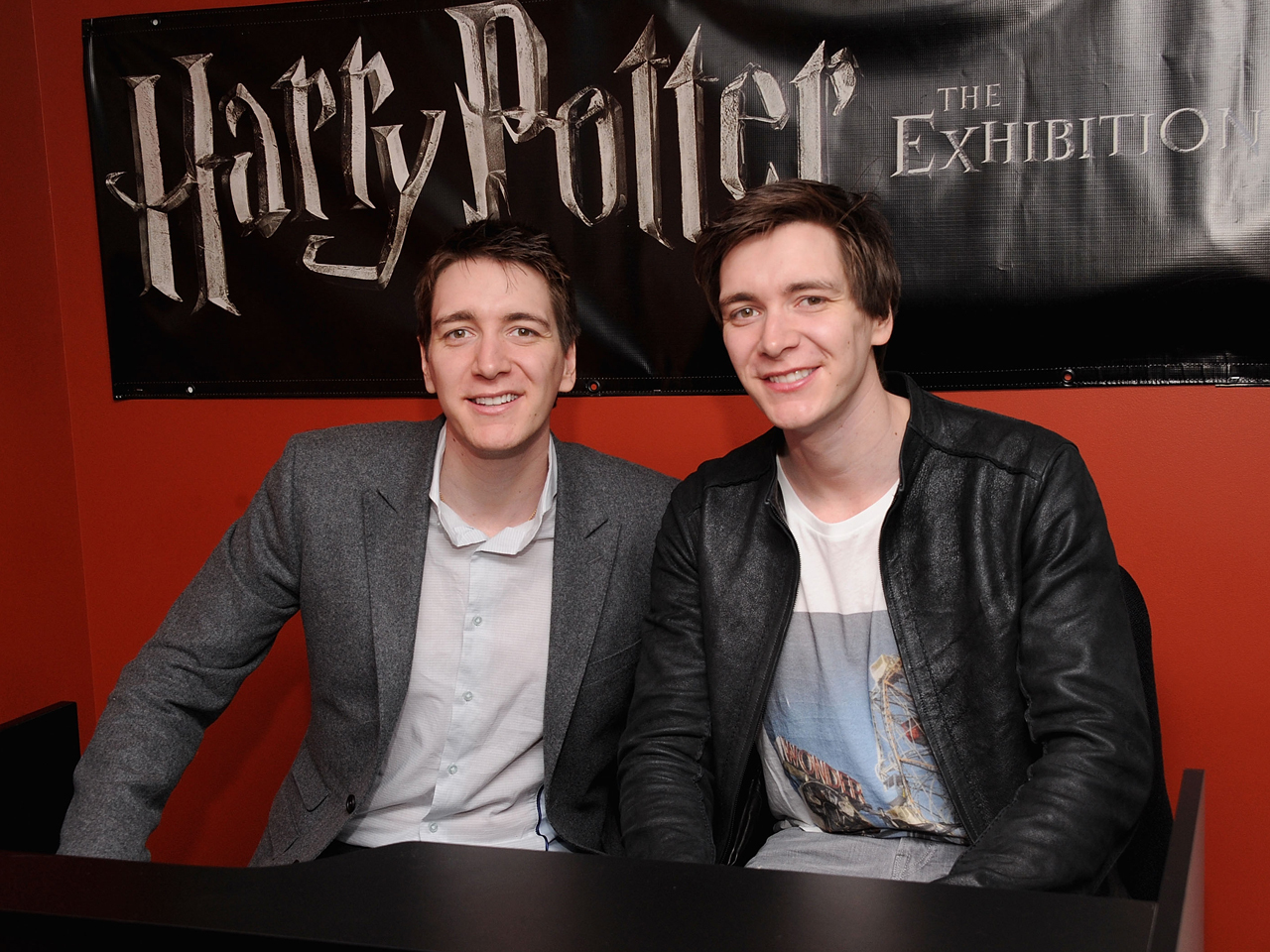 It's been at least 18 months since actors James and Oliver Phelps laid eyes on the costumes they wore in the final "Harry Potter" film.

But that changed this week when the British identical twin brothers, who played the Weasley twins on the hit film series, stopped by Harry Potter: The Exhibition at Discovery Times Square. They took a trip down memory lane as they spotted the many wands and other props now on display in New York.

"What's cool is when we made the movie we got to see all these first-hand -- and when it's on screen, it's only for a matter of seconds," Oliver told CBSNews.com. "So now fans can actually check out the amount of detail that goes into all the props. You can spend quite a lot of time here."

"I'm being biased, but my favorite thing would be our costumes from the final movie," added James, who first appeared as Fred Weasley in 2001's "Harry Potter and the Sorcerer's Stone." "You can see the attention to detail that goes into it. And obviously all the wands. Every character's wand was individual and unique to that character. We were never allowed to take them home because they're in the exhibition. So, it's kind of nice to check in on it."

When the eighth and final film, "Harry Potter and the Deathly Hallows: Part 2," hit U.S. theaters on July 15, 2011, it was met with great success, becoming the fourth-highest grossing movie of all time.

"The best memory I have is the final premiere in London...You could just see the joy on people's faces -- what it mean to them. That it was a chapter in their lives -- not just the people involved in making it," Oliver said. "It was one of those things that I think I'll remember for the rest of my life -- walking down the red carpet with thousands of people on either side of you."

"I think we were all ready [to say goodbye] because it had been such a great success and it became a normality to us," said Oliver, who played George Weasley during the series. "The studio was getting a bit worn down after every film. They were going to have to regenerate the whole studio. So you kind of knew it was coming to a close anyway. I think when we were doing our last day of shooting, the bulldozers were actually waiting outside. We needed to finish on a Friday because on the Monday, the bulldozers are moving in. So it was almost like, 'OK, this is finished.'"

After all, the twins had been part of the franchise since the very beginning, auditioning when they were just 14 years old.

James remembers picking up the "Harry Potter" books for the first time during a vacation with a family friend -- and becoming hooked instantly.

"Within four days, I think I read all three," he said. "So when we heard they were auditioning for the films, it wasn't hard task to think, 'We'll go to that. We'll try out for that.'"

"The most memorable thing would be the first day on the set of the first movie," added James, who just made his stage debut in London in "The Boy Who Was Woody Allen." "It was the first time we really met Daniel [Radcliffe] and Emma [Watson] -- all those cast members, who have become life-long friends."

And they are still in touch with many of their fellow cast members.

"The best way to describe it is if you go to college or high school, you make friends that you still talk to all the time," said James. "We play golf with Rupert [Grint] and Tom Felton quite a lot. Actually, we saw Tom get a hole-in-one a few months ago, which I still think was a very lucky shot."

When asked why "Harry Potter" resonated so much with fans, James said, "I think so many people could relate to it. Not in the magic sense, but the scenarios people put themselves in. I think everyone goes into a new environment where they don't know something and they learn from this like Harry does...Or everyone has a family friend like The Weasleys. Or there's that kid at school who you don't get along with."

And now at 27-years-old, the Phelps brothers are enjoying watching the "Harry Potter" phenomenon live on.

"I think what's happening now is that it's coming to the second generation of Potter fans. People who grew up watching it and had children are introducing their kids to it," said Oliver. "We certainly have seen at the exhibit this week that there's people who started seeing the films when they were in high school and now they're there with their young kids."

The "Harry Potter" exhibition will be at Discovery Times Square through April 7 before moving onto its next yet-be-announced location.