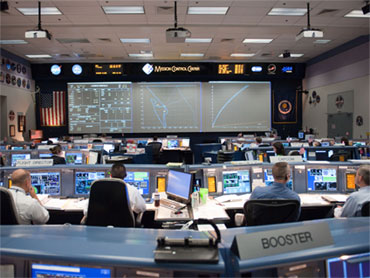 The shuttle is in good shape and ready for re-entry and landing Wednesday, entry Flight Director Tony Ceccacci told reporters Tuesday. While a marginal "50-50" forecast raises the possibility of a wave-off, Ceccacci said conditions are expected to improve as the week wears on, writes CBS News space analyst Bill Harwood.

"Basically, there's a chance of showers within a 30-mile circle," Ceccacci said. "You all know it's KSC, so it's a 50-50 chance no matter what the forecast says.

"One of the good things is, we've been watching the trends for a while and they're trending favorably. So our hope is when we come in tomorrow morning, things will still be trending in a good direction and we won't have to work it that hard. But again, it's KSC and we'll get what we get when we get there in the morning."

Assuming the weather cooperates, commander Kenneth Ham and pilot Dominic "Tony" Antonelli will fire Atlantis' twin braking rockets for three minutes and 10 seconds starting at 7:41:49 a.m. EDT, slowing the ship by about 233 mph to drop it out of orbit.

After a half-hour free fall, Atlantis will enter the discernible atmosphere over the south Pacific Ocean around 8:16 a.m., cross high above Central America and Cuba, and then descend up the Florida peninsula to a landing on runway 33 at the Kennedy Space Center.

The Atlantis astronauts have enough on-board supplies to remain in orbit until Saturday in a worst-case scenario. But the final day is normally reserved to handle technical problems, not the weather. As a result, NASA's backup landing site at Edwards Air Force Base, Calif., will be staffed for a possible landing on Friday if Atlantis hasn't made it back to Florida by then.

"As far as the landing strategy, with the end-of-mission-plus-three (consumables) and the current forecast, tomorrow we'll be trying KSC only and if for some reason we have to wave off, the plan is KSC only on Thursday," Ceccacci said.

The forecast for Wednesday at the Kennedy Space Center calls for a chance of showers within 30 nautical miles of the shuttle runway - a violation of NASA's flight rules - scattered clouds at 3,000 feet and broken decks at 10,000 feet and 25,000 feet. Winds are expected out of the northwest, right down the runway, at 12 knots with gusts to 18.

The forecast for Thursday calls for a chance of showers within NASA's safety zone, but lighter winds and less cloud cover. By Friday, conditions are expected to be acceptable at both Kennedy and Edwards.

In preparation, Ham, Antonelli and flight engineer Michael Good activated one of Atlantis' hydraulic power units early Tuesday, exercised the ship's aerosurfaces, and test-fired maneuvering jets in a standard pre-landing checkout. There were no problems of any significance.

Their crewmates - Stephen Bowen, Piers Sellers and Garrett Reisman - packed up loose gear and other equipment and readied Atlantis for entry. The shuttle's Ku-band antenna will be stowed at 1:10 p.m.