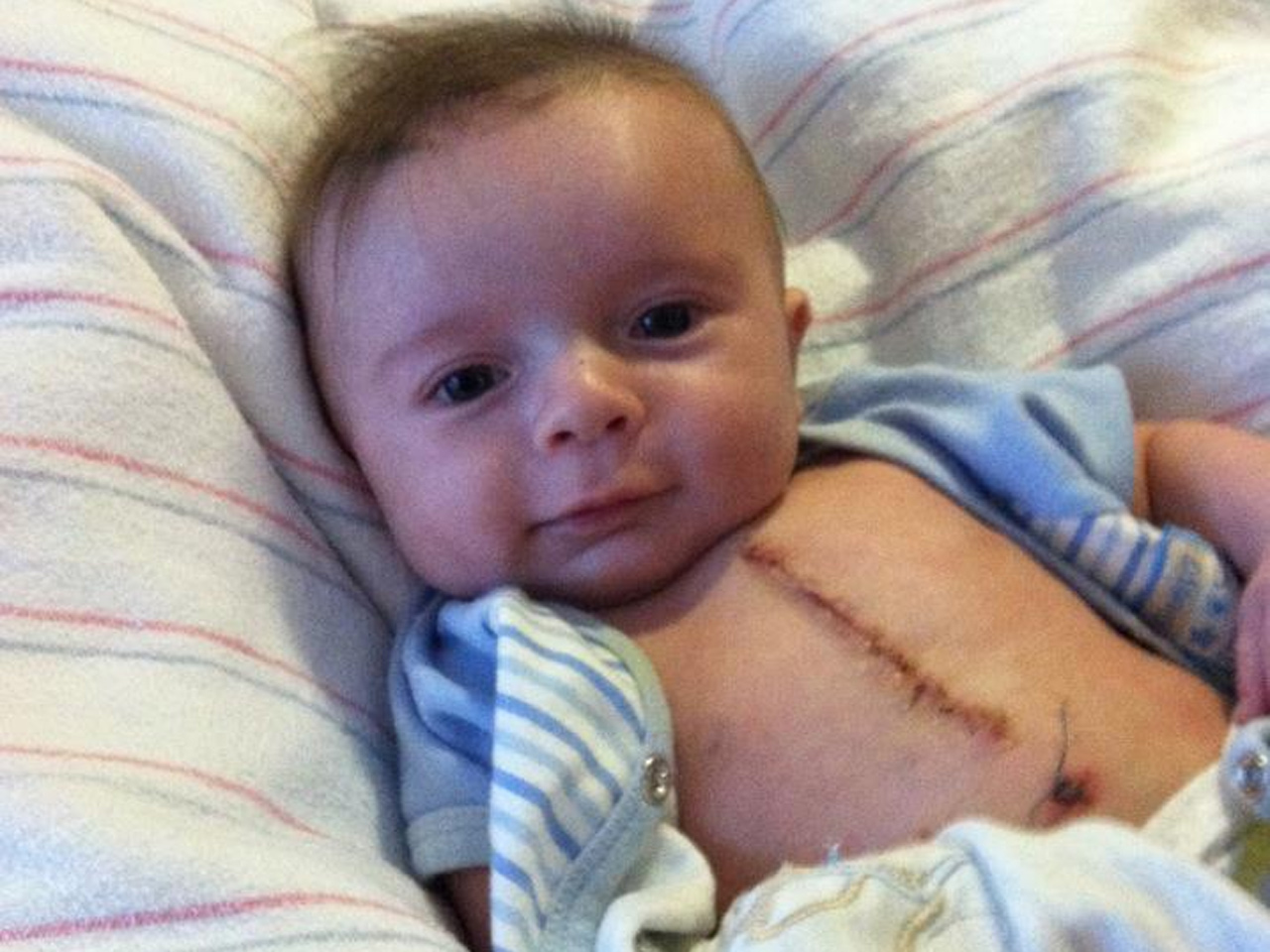 A photogenic 3-month-old boy who was captured on camera after his open heart surgery has melted the hearts of online users.

Joey Powling of Dracut, Mass. was born with tetralogy of Fallot (TOF), his uncle Dan Phelps wrote in an article for the Lowell Sun. TOF is a heart defect present at birth that causes low oxygen levels in the blood due to a ventricular septal defect (a hole between the right and the left and right ventricles); narrowing of the pulmonary outflow tract (the valve and artery that connect the heart with lungs); a shifted aorta (an artery which carries blood to the body) and a thickened right ventricle wall.

Symptoms include a bluish-purple color of the skin especially when the baby is upset, clubbed fingers, difficulty feeding, passing out and failure to gain weight. Though rare, it is the most common form of cyanotic congenital heart disease in children.

Joey's parents, Sarah and Joe Sr., discovered he had the defect while Sarah was pregnant. Doctors advised that he would need open-heart surgery at 3 months, and the procedure was performed on Oct. 25 at Boston Children's Hospital. The famous photo was snapped five days after the surgery.

"I started taking the picture and Joe was next to him playing with him and all of a sudden Joey started smiling with this big huge smile and I thought, 'Whoa this is a cool picture,'" Sarah told CBS station WBZ in Boston.

She posted the photo on her Facebook, and her brother, Matt Tassone, posted the picture on Reddit. He titled the thread, "My three month old nephew just had open heart surgery. Chicks dig scars, right?"

Some of the comments are stories of how redditors got their own personal heart surgery scars or tales of people they have known who have gone through similar procedures.

"My brother (who is in his late 20s now) had open heart surgery at 4, numerous allergies and hideously bad asthma as a kid," user LadyGrizabella wrote on Reddit. "Mom told him 'No no don't do that! It's dangerous! You're too sick to do that!' more times than I can count as a kid.You know what he does now? He's a wildman, living in the woods (works for the US Forestry Dept) and is currently enrolled in training to become one of those dudes who leaps out of helicopters to put out forest fires."

"As a 24 year old who has had that exact scar since I was four(born with a heart murmur) I can safely tell you that, yes, chicks love scars," user LikeGoldAndFaceted added on Reddit. "Every girlfriend I've had has said they like it and think it's cool and sexy."

His parents hope that Joey's positive attitude can help bring awareness to childhood heart defects and inspire others.

"Just the fact that he's happy, with everything going on, being away from his own environment, having that scar, and he really could care less," said Joe said to WBZ.