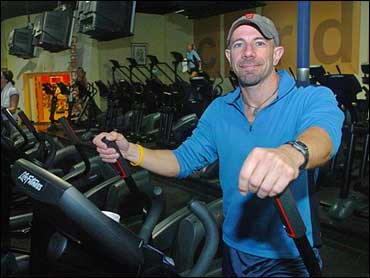 Frustrated by government and empowered by technology, Americans are filling needs and fighting causes through grass-roots organizations they built themselves — some sophisticated, others quaintly ad hoc.

This is the era of people-driven politics.

From a homemaker-turned-kingmaker in Pittsburgh to dog owners in New York to a "gym rat" here in southwest Florida, people are using the Internet to do what politicians can't — or won't — do.

This is their story, but it's also an American story because ordinary folks are doing the extraordinary to find people with similar interests, organize them and create causes and connections.

"People are just beginning to realize how much power they have," said Chris Kofinis, a Democratic consultant who specializes in grass-roots organizing via the Internet.

"At a time when we are craving community and meaning in our lives, people are using these technologies to find others with the same complaints and organize them," he said. "They don't have to just sit in a coffee shop and gripe about politics. They can change politics."

Mary Shull changed her life, if not politics.

A lonely and frustrated liberal, the stay-at-home mother of two joined the liberal online group MoveOn.org in 2004. Working from home, the Pittsburgh woman helped round up votes for presidential candidate John Kerry and other Democrats. On Election Day, Kerry prevailed in Pennsylvania, but failed to unseat President Bush.

"I was upset with Kerry's loss, but what really devastated me was the loss of that sense of empowerment in my life, this sense of engagement, that I got with MoveOn," she said.

Shull, 31, was brimming with ideas for liberal causes, but MoveOn had virtually shut down after the election and the Democratic Party was catatonic. So she took matters in her own hands, e-mailing the 1,500 contacts she had made through MoveOn and asking if they wanted to keep busy.

Their first meeting drew 85 people. They got involved in local races, and Shull tended to her e-mail list — each name coded with the person's pet issue.

"This wasn't about a huge agenda. This was people gathering together and working with each other on things that interested them," she said. "It was just a way for people to connect with each other."

Politicians took notice. When former Rep. Joe Hoeffel decided he might want to run for lieutenant governor, he called Shull and asked for her support.

"Ten years ago, somebody like Mary would be as interested as she is in politics, but her circle of influence would not have extended beyond her home or block or even voting precinct," said Hoeffel, a Democrat who gave up his House seat in 2004 for an unsuccessful Senate bid.

"Now, she's got 1,500 other self-motivated and influential people at her fingertips, and carries as much clout as half the people I've been calling."

MoveOn, founded in 1997 to fend off President Bill Clinton's impeachment, raised $60 million for liberal causes in 2004. The group put its organizing muscle behind Cindy Sheehan last summer and helped make the "Peace Mom" whose son was killed in Iraq a symbol of the anti-war movement.

Political activist Tom Hayden believes that the anti-war movement in the 1960s, which he helped organize, could have gained steam sooner had the Internet existed.

"Movements happen so much faster today," he said.

And they come in all shapes and sizes.

Shannon Sullivan's 9-year-old son wanted to know why Mayor James E. West used a city computer to solicit gay men over the Internet, and why nobody was doing anything about it.

"Mom, you better do something."

So she did. A single mother with a high school education and no political experience, Sullivan launched a recall campaign that used an Internet site to organize rallies and media events. Turns out there were thousands of other people in Spokane, Washington, who wondered why nobody was doing anything about West.

"I was mad at people for not doing anything. I was mad at the system and I was mad at James West," she said after her campaign succeeded in convincing voters and the mayor was recalled. "I'm not so mad anymore."

Roberta Bailey likes Pugs — the jowly, wrinkly faced breed of dog she keeps as a pet. She also likes punk rock and people. With the help of the Internet, the Manhattan photographer found a way to combine her interests: She organized a group of Pug owners who fought to save a legendary punk venue.

"I got off my butt and did something cool," she said.

Using the Meetup.com Web site, Bailey organized a "Million Pug March" in Washington Square Park to show support for the venerable club CBGB. It's as close to politics as she has ever come.

"Who knows what me and the Pugs can do to change the world some day," she said, giggling.

Howard Dean used Meetup.com in 2003 to organize anti-war activists behind his Democratic presidential campaign. Though his candidacy petered out, the Web site continued to grow.

Nearly 2 million people log into the site to find others with similar interests. There are more than 4,000 topics — everything from witches and pagans to wine enthusiasts, working moms and divorced dads.

"People really get a certain high about connecting with other human beings," said Scott Heiferman, the site's co-founder. "Because we live in such an isolated culture, when people come together with other like-minded people, there is a sense of, 'Let's organize to do something."'

Matt Margolis got tired of hearing about the rising influence of liberal blogs so he scrolled the Internet for advice on how to start an online diary of his own. He enlisted writers. He got help with designing a home page. He found somebody who knew how to write computer coding.

"It took a community of people to get me going," said the 25-year-old architecture student from Boston. By the end of the 2004 election, he had nearly 1,500 other bloggers posted on his site — an army of Bush backers who donated time and money to the president's re-election campaign and wrote letters to the editor on Mr. Bush's behalf.

Dave Renzella is a fitness instructor at Omni gym in Fort Myers, Florida. In his spare time, he plugs into the MoveOn Web site to get the e-mail addresses of fellow liberals and tries to organize them.

Eli Pariser, the 25-year-old executive director of MoveOn Political Action, said the people-driven trend is a good thing for democracy, a chance to "shift the balance of power from established interests that can raise of lot of money and lobby special interests to a bunch of bubble-up, bottom-up citizen campaigns."

These newly empowered constituents are using technology to send a message to politicians. Iowa Gov. Tom Vilsack frequently hears from citizens via e-mails on his Blackberry.

"It's great because it reconnects people to government. It's created a sense of community and a sense of belonging," he said.

Politicians who pay little heed could find frustrated voters banding together and creating a third-party movement.

"At some point this has got to reach critical mass," Kofinis, the Democratic Party consultant, said. "Nobody knows when that will happen or how that will happen, but it will literally explode into a movement."