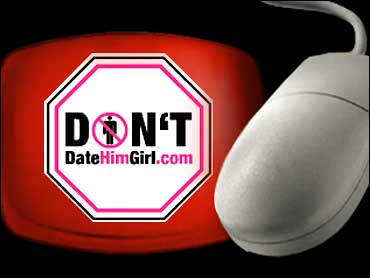 A Florida-based Web site that invites women to warn others about men they have dated cannot be sued in a Pennsylvania court by an attorney who said its postings falsely claimed he was unfaithful and had sexually transmitted diseases.

Judge R. Stanton Wettick Jr. ruled he has no jurisdiction over part of the lawsuit Todd Hollis filed last June against DontDateHimGirl.com and its creator, Tasha C. Cunningham, 34, of Miami.

Hollis, of Pittsburgh, claimed Cunningham's site is liable because it solicits negative comments but does not screen them for truthfulness. Hollis also is also suing those who posted comments that questioned his sexuality and said he tried to dodge paying child support.

The judge let stand the attorney's defamation claims against seven women who posted messages criticizing him on the site.

Cunningham and her attorneys say a 1996 federal law shields Web sites from such lawsuits.

Wettick did not address that issue. He simply ruled that Pennsylvania's court system has no jurisdiction over a Florida Web site, even though Pennsylvanians post messages on it. The ruling, issued Thursday, does not address Hollis' still-pending claims against women who posted the messages.

Hollis said he did not learn of the judge's decision until The Associated Press called him for comment Tuesday. Hollis has not decided whether to sue the Web site again in another venue.

Byer acknowledged Hollis could refile the suit in Florida or in U.S. District Court, which accepts lawsuits involving parties in different jurisdictions. "But then he'd come up against the Communications Decency Act, which says the site can't be held liable for postings by a third-party user," Byer said.

Hollis contends Cunningham can be sued because she is more than just an inactive overseer.

Cunningham's site has tripled in size since the lawsuit was filed, with 27,000 profiles that she markets as "a new cost-effective weapon in the war on cheating men." Cunningham works full-time on the site and is developing others, including a Spanish language version that will launch in June.

One of the women Hollis sued has since filed a counterclaim, denying she made any posts. Another Pittsburgh-area woman who dated Hollis, Meritt Lattimore Dallas, acknowledged posting comments but denied damaging his reputation.

Dallas' attorney, Laurene Beckie Kane, said much of the bad publicity Hollis received came from his own efforts to publicize his case in Pittsburgh-area media.

"If that's affected him, that's his own doing," Kane said.