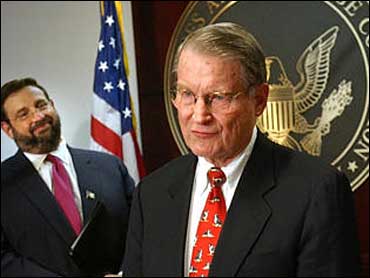 Former FBI and CIA director William Webster, mired in controversy over his selection to head a new accounting oversight board, resigned the position Tuesday.

The move capped weeks of speculation regarding Webster's future in a debacle that already has brought the resignations of Bush appointee Harvey Pitt, chairman of the Securities and Exchange Commission, and the SEC's head accountant.

"I now believe my continued presence on the board will only generate more distractions which will not be helpful to the important mission of the board," Webster said in his resignation letter.

"Those who know me will appreciate that I do not abandon duty lightly. It is time to clear the air," he said.

Webster announced his resignation in a letter to Pitt, who quit earlier following a flap over his apparent failure to inform fellow SEC commissioners that Webster headed the audit committee of a company under investigation for fraud.

President Bush last week voiced confidence in Webster's integrity, although Mr. Bush also said that he wanted to see the outcome of an investigation of the circumstances surrounding Webster's selection.

Pitt is facing investigations into whether he concealed from the rest of the SEC members Webster's watchdog role the company which is under investigation. The SEC voted 3-2, along party lines, to appoint him on Oct. 25. Pitt and the other two Republicans approved Webster and the two Democrats opposed his appointment.

In a statement accepting the resignation, Pitt made no mention of the controversy surrounding Webster's appointment. "I continue to believe that investors would have benefited from Judge Webster's dedication to the best interest of the American people," he said.

Webster's resignation came a day before the oversight board was scheduled to have its first meeting.

The turmoil comes at a time when the government is trying to bolster the confidence of investors and consumers shaken by corporate scandals over the past year and the SEC is investigating questionable accounting at dozens of big companies.

Webster's appointment was pushed by Pitt and endorsed by the Bush White House. Democrats preferred John Biggs, head of the largest teachers' pension fund, whom they believed would be tough on the accounting industry.

Creation of the oversight board was mandated by Congress last summer in legislation responding to the wave of accounting scandals at Enron, WorldCom and other big companies. The five-member board, to be independent of the accounting industry, will be armed with subpoena authority and disciplinary powers and financed by fees from publicly traded companies.

Webster has said he told Pitt that he headed the audit committee at U.S. Technologies, which is considered insolvent and has been sued by shareholders alleging fraud. The office of the chief accountant, Robert Herdman, then told Pitt that information did not create a problem for Webster's selection.

Webster fired U.S. Technologies' outside auditors last year when he headed the board of directors' auditing committee.

The auditing firm, BDO Seidman, recently alleged that Webster had made "false and misleading statements" about how much he knew about the company's financial problems.

BDO Seidman also released documents showing that in a July 13, 2001, conference call with the audit committee, its accountants warned the committee members of "material weaknesses in internal accounting control."

Webster said last week that the auditors did voice concerns, but not in an urgent, "house on fire" way. He continued to insist that BDO Seidman was fired because the audit committee believed it was charging too much and taking too long to do its audits — not because of a warning about the company's financial controls.