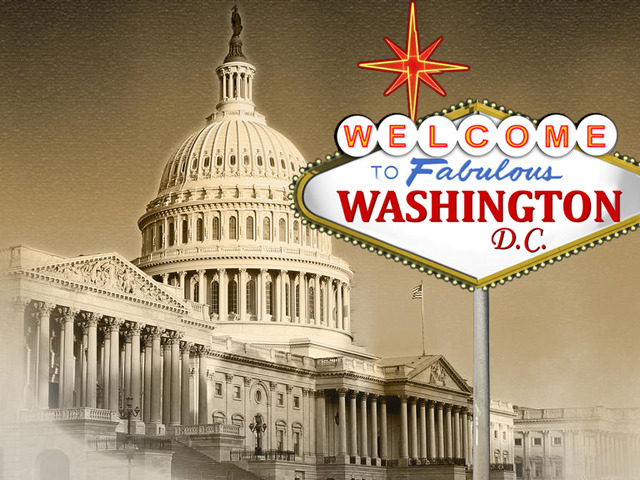 It may have been difficult for the new class of Representatives-elect, who ran on an anti-D.C. platform, to see what's so bad about Washington as they landed today at Reagan National Airport for freshman orientation this week.

The sun was shining, the Potomac River sparkled, and the leaves on the trees displayed a beautiful range of fall colors.

Each Member-to-be received the royal treatment immediately upon their arrival.

They were greeted and escorted to baggage claim by a member of the U.S. Marines and then chauffered to a D.C. hotel in black SUVs from Enviroride (an "Eco-friendly Limousine and Sedan Service," according to the vehicles' painted side panels).

Some with more name recognition, like Republican Kristi Noem of South Dakota (who is expected to run for a newly-created freshman leadership post), were greeted by a swarm of reporters and camera crews wanting to follow her every move, paparazzi-style.

So many reporters, in fact, that Noem (who's been compared to Sarah Palin) ended up holding an impromptu press conference right off of baggage claim. She talked about the new leadership position while her husband looked for their luggage.

"It's a good indication that leadership is willing to listen to this freshmen class," Noem said. "It is a unique class with a lot of members and a lot of new ideas and a lot of small business owners. People who've been involved in business might have some solutions for getting this economy back on track."

Others didn't attract, or seek, the spotlight. Republican Austin Scott of Georgia was able to slip away almost unnoticed.

"Got to get to work on jobs and the economy," Scott said before quickly ducking into his SUV.

Meanwhile, Representative-elect Tim Scott from South Carolina arrived early Sunday without the pomp and circumstance, having traveled to Washington a week ago to be part of the GOP transition team. With a smile and a wave, Scott slipped through the crowd at the airport like a politician with somewhere important to be.

And today is just Day One of a busy week for nearly 100 incoming freshmen.

After attending a slew of receptions today to welcome the new Members to town, they get down and dirty tomorrow for Congress 101, where they will learn how to hire their staffs and find district offices.

On Tuesday, it's the freshmen class picture, followed by a lesson in parliamentary procedure on the House floor.

They get to cast their first votes for party leadership and rules on Wednesday and Thursday.

And it all ends Friday, when Members participate in an all-day office lottery. This is important. Getting first pick means a spacious office in a prime location.

Picking last means they could end up in a cage-like office on a floor without an elevator.

Then it's back to their districts . . . and back to the airport, to start preparing for January 5th, when the job (and all its responsibilities) becomes a reality.