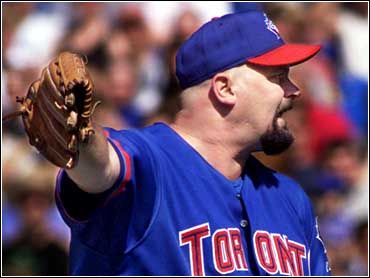 "This was nice to have, especially after three or four bad outings in a row," Wells said.

Wells (18-5) equaled his career high in wins, previously done in 1998 with the New York Yankees. The 18 wins are the most by a Blue Jays left-hander.

Despite the win, the 37-year-old Wells is 3-3 with a 6.40 ERA in eight outings since starting the All-Star game.

"It was an important win for us, and for him," Toronto manager Jim Fregosi said.

The Blue Jays began the day four games back of the Boston Red Sox and Oakland Athletics in the AL wild-card race.

Wells allowed three runs on nine hits for his AL-leading seventh complete game of the season. He walked none and struck out seven.

"This was vintage David Wells," Fregosi said. "He gave up a couple of runs early, but then he came back and pitched really well."

Wells has 11 walk-free games this season, and has issued just 28 bases on balls.

Down 3-1 in the seventh, the Blue Jays rallied with three runs.

"Once he got the lead, Wells became unhittable," Minnesota's Denny Hocking said.

Minnesota took a 2-0 lead in the first on RBI singles by Matt Lawton and David Ortiz.

"I just made some flat pitches in the first inning and they were all over it," Wells said. "I didn't look too good for a while, but I settled down."

The Twins made it 3-0 when Ortiz grounded into a double play in the third.

Toronto got a run back in the fifth when Gonzalez singled in Greene.