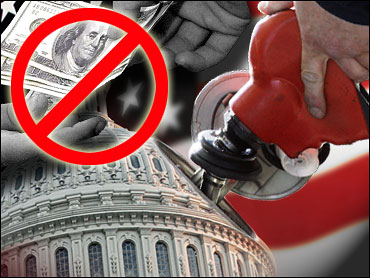 Let's face it: Americans have been spoiled by low gas prices. The president said it himself: We're addicted. So when the junkie has to pay more for a fix, what happens is not good.

Looking at the latest CBS News polling data tells quite a story. When asked if the government is doing all it can to keep prices down, 87 percent said no. 87 percent.

How about the president's handling of gas prices? Seventy-four percent disapprove. Finally, when asked if the Bush administration is doing a good job keeping prices down, 82 percent say no.

If you believe that it's your God-given right to get cheap gas, then this current price spike is probably testing your faith. There seems to be no end in sight. Some analysts say the price of a barrel of oil could go up another $10 or $20.

But wait. The unintended consequence of the price spike is that consumption, which always goes up, is actually flat. And guess what: If we use less, it will cost less.