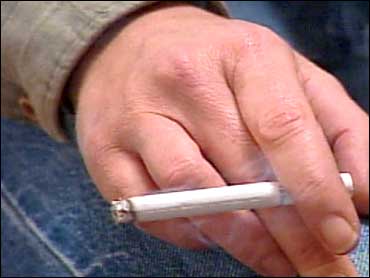 The Westin hotel chain is banning smoking indoors at its properties in the United States, Canada and the Caribbean, and will add $200 to the bill of anyone who violates the policy, an executive said Monday.

Westin Hotels & Resorts is banning smoking indoors and poolside at all 77 of its properties in those regions, said senior Vice President Sue Brush. Smokers will have to go to a designated outdoor area, she said.

The policy will not extend to Westin's overseas hotels or to other chains, such as Sheraton, that are under the same parent company, Starwood Hotels & Resorts Worldwide Inc. Westin was the brand that "had the least amount of smokers to begin with," Brush said.

Enica Thompson, spokeswoman for the American Hotel & Lodging Association, said Westin is the first major American chain to go smoke-free and predicted that "many of the other hotel chains will probably want to see how it works out for Westin" before following suit.

Eight Westin hotels were already smoke-free, and at least 5 percent of the rooms at the others had been set aside for nonsmokers, Brush said. But market research found that 92 percent of Westin's guests were requesting nonsmoking rooms, and some of those who couldn't get them were "quite upset," she said.

"When we talk to our consumers, what they want for their personal renewal is a smoke-free environment," she said.

Brush said customers will be advised about the policy at check-in. If a guest violates the rule — "when we can observe it by smelling it or whatever" — a $200 fee will be added to the bill.

"It's really a cleaning fee," she said. The 2,400 smoking rooms in the chain are undergoing deep cleaning and air purifying before the Jan. 1 changeover, "and once you smoke in there you've violated that entire environment and we have to clean it all over again."

The smoking ban will apply to hallways, lobbies, and restaurants, except for the eight restaurants that are run by outside companies and not under Westin's control, Brush said. "They will be invited to participate," she added.

A spokesman for Westin rival Marriott International Inc., John Wolf, said several Marriott hotels and 85 percent of the chain's rooms are smoke-free but there are no plans to go smoke-free nationwide.

Brush said there might be a dip in business at the beginning of the year as smokers go elsewhere, but Westin expects to quickly replace that business with travelers favoring the new policy.

To this day, advocates have been struggling to locate more than 600 migrant parents. President Biden has pledged to create a task force to help locate them.