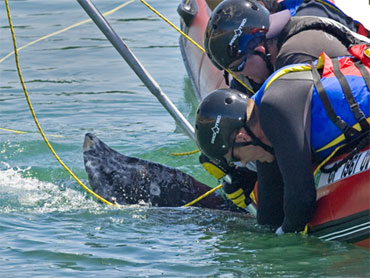 A young gray whale has returned to a Southern California harbor, one day after rescuers removed 150 pounds of fishing nets and ropes from its fin and tail.

Surfers and beachgoers spotted the 35-foot, 20-ton female Thursday morning and biologists are concerned she is malnourished.

The whale, nicknamed Lily, had been lethargic and listless this week before a rescue team removed the netting Wednesday and she headed out of Dana Point Harbor for the ocean with more energy.

Wildlife biologist Joe Cordaro of the National Marine Fisheries Service says it appears Lily is fatigued and malnourished. He says crews will not become involved unless she beaches herself.

They'll put a watch on her, keep boaters 100 feet away and helicopters above, but he says they won't close the harbor.

The distressed seemed energized Wednesday as it swam away after being freed from the fishing gear, biologists said.

Witnesses earlier said she appeared old, sick and scaly and ready to die. Gross said Lily turned out to be a juvenile who had become encrusted with barnacles and sea creatures because she was swimming so slowly.

She became fatigued after encountering the commercial fishing nets that got tangled around her fins and tail.

The disentanglement team — two from SeaWorld in San Diego and two from the Pacific Marine Mammal Center in Laguna Beach — started working to free her Wednesday morning. Hours later, they had removed a pair of dangling ropes and the 150 pounds of netting caught around her tail.

The trick was getting under the ropes so the blade wouldn't cut the animal, explained wildlife biologist Joe Cordaro with the National Marine Fisheries Service in Long Beach.