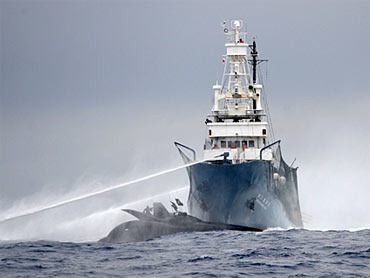 Japanese whalers and conservationists squared off Thursday for more hostilities in the Antarctic, a day after the hunters crushed one of the activists' boats in a clash each side blamed on the other but all agreed endangered lives.

Sea Shepherd Conservation Society searched Antarctic waters by helicopter for a key Japanese whaling ship on Thursday, renewing its attempts to find and harass the whalers into giving up their hunt, the group's founder Paul Watson said.

The escalating Antarctic confrontations were broadly condemned, but no plan was immediately hatched to prevent future confrontations. Legal uncertainties about jurisdiction and the remoteness of the area make policing the international waters at the bottom of the world extremely difficult, experts say.

Japan kills about 1,200 whales a year in Antarctica under what it says is a scientific program allowed by the International Whaling Commission despite a broader moratorium on killing the mammals. Critics say the program is a front for illegal commercial whaling, and Sea Shepherd sends ships to Antarctica each season to try to stop the hunt - an effort portrayed on the Animal Planet TV series "Whale Wars."

On Wednesday, the Japanese whaling ship Shonan Maru plowed into Sea Shepherd's Ady Gil, knocking the bow off the wave-piercing trimaran speedboat that is one of the group's trio of vessels trying to harass the hunters out of business.

Australia and New Zealand, the closest nations to the latest confrontation, announced investigations Thursday into the crash.

The whaling is conducted in international waters, but usually within the huge patch of ocean that is designated as Australia's maritime rescue zone and that Canberra considers a whale sanctuary.

But rules governing Antarctica are not clear cut. The frozen continent and the oceans around it are administered by agreement between nations, and there are conflicting claims about sovereignty.

"There is very little ability for a sort of police force to just turn up on the scene to separate the two sides" when then is a dispute such as Wednesday's clash, said Don Rothwell, a professor in international law at the Australian National University who wrote a recent report for the government on Antarctic whaling.

It was possible Sea Shepherd could try to sue the whaling ship's master for negligence in Wednesday's clash, he said. But the whalers could also try to have the Ady Gil charged with terrorism at sea for trying to foul its propellers with rope - a tactic Sea Shepherd openly says it uses.

Japan said it had asked countries that let the conservationists register their ships or use their ports to help curtail the group's aggressive acts. Sea Shepherd leader Paul Watson said Australia should send its navy or a customs vessel to stop what he calls illegal poaching.

But Wednesday's clash was unlikely to produce any useful change in policy, and had actually raised the chances of a further escalation in the whaling face-off, said Rothwell.

"This is the great fear at the moment," he said.

"Sea Shepherd is using very strong language, talking about a war with the Japanese," he said. "Increasingly, the Japanese have become more aggressive in their responses - we can expect that there will be more clashes."

Sea Shepherd says the Ady Gil was sitting idle and the whaler deliberately rammed it. Japan says the activists' boat was moving toward its ship and a miscalculation on their part caused the collision. Neither side's version - which happened near Commonwealth Bay about 1,500 miles (2,400 kilometers) south of Australia - could be independently verified.

Two cracked ribs to a Sea Shepherd volunteer were the only injuries reported.

"I've never been so close to death in my life," Laurens de Groot, a 29-year-old Dutch member of the Ady Gil's crew who was not injured, told The Associated Press by satellite telephone on Thursday. "While I was standing on the roof and that harpoon ship was coming in at full speed, you think: `This can't be real, it's not really happening."'

Neither side showed signs Thursday of backing down.

"The series of sabotage acts by the Sea Shepherd were very dangerous and risked the life and safety of the Japanese crew members," Japanese Foreign Ministry spokesman Yasuhisa Kawamura told reporters in Tokyo.

Watson vowed his group would not step back, saying "We now have a real whale war on our hands."

He said a helicopter the group's main ship, Steve Irwin, was launched Thursday to try to find the Japanese fleet's whale processing ship and resume attempts to disrupt the whalers.

Meanwhile, crew were removing fuel, the boat's engines and other items from the Ady Gil, which was being attended to by the group's third vessel, the Bob Barker - named for the former U.S. "Price is Right" TV host who recently gave Sea Shepherd $5 million.

Watson said he expected the Ady Gil to sink, though de Groot, the crewman, said plans were afoot to have it towed to Dumont d'Urville Station, a French scientific base, for salvage or repairs.

"Our priority right now (is) to make sure there is no pollution from that vessel," Watson told AP.

Acting Australian Prime Minister Julia Gillard said there were no immediate plans to send a government vessel to the region. She said Canberra's ability to act was hampered because Japan did not recognize Australia's jurisdiction in the region.

"This is an issue where emotions run high," Gillard told reporters. "I am saying to everyone out in these dangerous and inhospitable waters that this is a time for calm judgments. We do not want to see people taking risks that result in a loss of life."