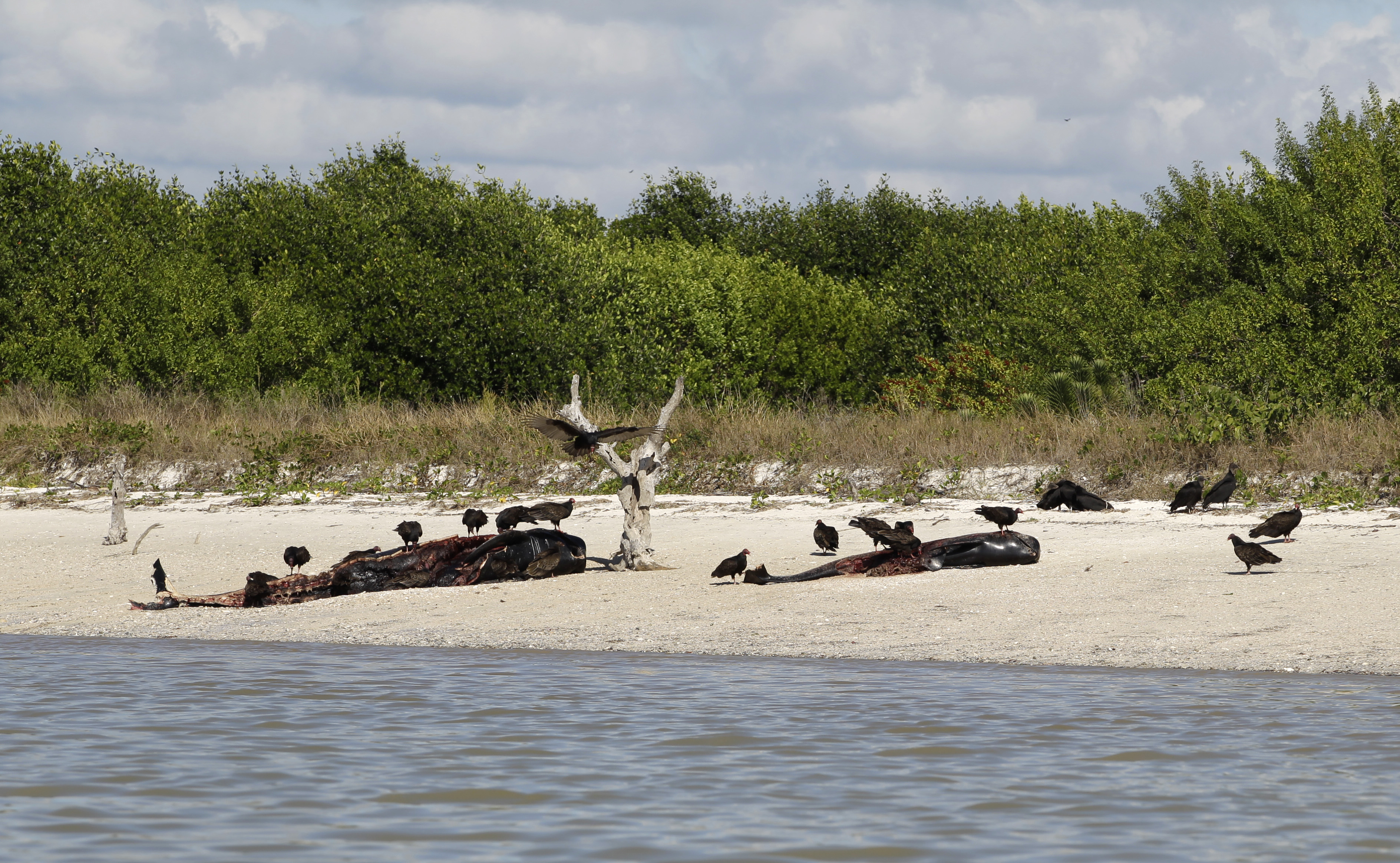 The couple - from Michigan but now living in an Everglades boathouse - had spent two days of trying to coax the animals into deeper waters. On Tuesday, they physically pulled several whales from the sand of the remote Highlands Beach. They spent Wednesday with other wildlife workers in boats, forming a semi-circle around the pod and banging their vessels with anchor chains in an attempt to move the animals further offshore

But the whales seemed fatigued and unmotivated. They moved just half a mile out to sea during the volunteers' rescue effort.

"I thought a number of them might not make it," Donna Buckley, 72, said.

On Thursday, Donna Buckley and her husband went back across the sage green waters to where they'd worked with the whales. This time, though, they were gone.

Sometime overnight the whales had begun moving toward their natural, deep-water habitat, some 20 miles from where they were found, a possibility that had seemed highly unlikely just a day before, when officials warned that the animals faced a puzzle of sandbars and shallow waters to make it out to sea.

CBS Miami reports that experts are “cautiously optimistic” as 35 of the deep-sea mammals were headed northwest, being followed by a Coast Guard Cutter until night fall. The caution remains as this species is known to re-strand itself, according to Blair Mase, the Southeast Marine Mammal Stranding Coordinator from NOAA fisheries.

“A lot more encouraged than I was yesterday,” said Mase, but did add that there was still no guarantee that the whales will move offshore.

A Coast Guard helicopter found two pods of whales early Thursday in a deeper area of water - about 12 feet. By late afternoon, Mase said three pods had been located nine miles north of their original location and were moving offshore.

"That was a surprise," Donna Buckley, a former national canoe racing champion said. "Quite the surprise."

Mase cautioned that the whales still face a number of challenges. While they were no longer drifting in a dangerously shallow area of 2 to 3 feet of water, the whales were still about nine miles from the deeper, cooler water to which they're accustomed. Pilot whale pods also are known to be so close-knit that if one animal falls ill or dies, the others are likely to stay within the vicinity or even beach themselves as well.

"It's quite a distance to deeper water," Mase said.

About 15 vessels carrying about 35 personnel were involved in the effort to track the whales.

Wildlife workers had planned Thursday to try using noises such as banging on pipes and revving boat engines to herd the whales out to the open ocean. But that turned out to be unnecessary, and the workers simply used positioning of the boats to prevent any of the whales from turning away from the open sea, Mase said.

Teams from NOAA, the National Park Service, the Coast Guard and state wildlife agencies were working to prevent any more whales from stranding. A Coast Guard cutter was to remain stationed with the whales overnight Thursday.

At the end of efforts early Thursday evening, the number of deaths still stood at 11. Six were found dead Wednesday morning and four others were found in extremely poor condition and euthanized later that day. Another dead whale was confirmed Thursday, and five were unaccounted for.

Donna and John Buckley were the first to respond after a fishing guide spotted the beached whales Tuesday afternoon. A call came across the parks radio, and the Buckleys were the closest volunteers to the remote western edge of the Everglades park where the whales were found.

When they got to the beach, John Buckley waded through the shallow waters in a canoe while his wife stayed aboard the boat, counting the whales drifting before her. In their 28 years as volunteers in the Everglades, they had seen only one whale stranded before.

John Buckley climbed ashore and ran to one of about nine whales stuck on the sand. He grabbed its tail and began to pull.

"Once the whale could feel the water, it reacted," John Buckley, 72, said. "It wanted to help."

The whale flapped at him, knocking him into the water. He got back up and continued pushing the whale until it was entirely back in the water. Three park rangers then arrived and started working with him to pull the other whales off the beach.

A nearby calf and an adult whale were motionless.

"There was no helping them," John Buckley said.

But he and the rangers were able to help another calf and a whale that appeared to be its mother get back into the water.

The whales they were able to help save seemed ill, Donna Buckley said.

"They seemed very disoriented, confused," she said. "They didn't know which end was up."

The next day seemed to only confirm their suspicions that the whales were sick. The couple said the animals drifted languidly in the water, as if, John Buckley imagined, paralyzed by grief. He recalled how the whales seemed to look at him, quietly acknowledging his presence.

"They could have just rammed me and knocked me over, but they didn't do it," he said. "I could tell there was some thinking going on there. I just didn't understand."