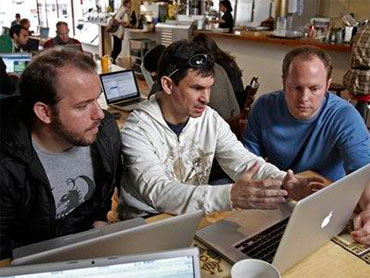 It used to be that a potential employer would call your references to see whether you'd be a good fit. But what if you showed up for an interview and the employer already knew you blew an important project at your current job, just by checking on the Web?

Unvarnished lets your peers say what they really think of you. It's similar to sites such as Yelp that let people post anonymous reviews - except in this case, it's a person, not a business, that is getting reviewed.

Unvarnished co-founder Peter Kazanjy says the idea emerged after realizing there can be a difference between job candidates' attitudes in an interview and their attitudes after they're hired. Time and money get wasted if a new employee doesn't work out.

Kazanjy, previously a senior product marketing manager at VMware Inc., acknowledges that allowing people to write reviews without attaching their names entails trade-offs. Anonymity often unleashes nasty comments online. And it might make people more skeptical of the validity of Unvarnished's reviews. But it also helps people write what they really think.

"We want to empower honesty and candor and nuance in the reviews," he says.

Don't bother hopping on your computer yet. Not just anyone can access www.getunvarnished.com because the site is in a private "beta" test. It's not yet clear when it will be widely rolled out.

That means that to write or see any reviews, you have to be invited by a user and write a review of him or her. It also means that people could be writing reviews about you, good or bad, and you'd have no idea unless someone who can access the site told you.

A look around the site didn't reveal that many negative reviews, however. Unvarnished requires users to rate people on a scale of one to five stars, and Kazanjy says more than 70 percent of the site's thousands of reviews are four or five stars.

Beyond the star rating, you can evaluate people from one to 10 on characteristics such as productivity and integrity. You can also write a short review detailing someone's strengths and weaknesses.

Although reviews on Unvarnished are anonymous in the sense that the subject and others who see that person's profile won't know who wrote the reviews, Kazanjy says the site has a way of checking who its writers are. It uses Facebook's Connect identification tool to authenticate users and determine that they are not spammers. That tool asks people to log in to the website with the same username and password they use on Facebook, and lets the website obtain information from those users' Facebook profile.

Unvarnished's founders realize this may open the door for subjects of unflattering reviews to subpoena the site for information about who wrote the reviews. But the site itself would be largely protected from defamation claims, for example, under a federal law that gives broad immunity to service providers for postings made by their users.

For now, Unvarnished still has a small enough user community that it can manually sift through all reviews posted on its site, nixing those that look unreliable or responding if someone complains that a review about them is false.

Unvarnished, which is funded by its three founders and operated by them out of San Francisco coffee shops, is concentrating on growing its community and making sure people are posting useful information, Kazanjy says. He and the other founders, who previously had been at eBay Inc. and career-networking site LinkedIn, think Unvarnished will limit its focus to professional reputations. Charging companies for access to some of Unvarnished's information could be the site's method of making money eventually.

Adam Helweh, an Unvarnished user and the owner of a marketing and design company, Secret Sushi Creative, has received four five-star reviews on the site. He's been described as a "knowledgeable, engaging and informative" speaker and "enthusiastic in helping small business owners."

But he is skeptical about Unvarnished's prospects. He doesn't think the site's content is more valuable than profiles on LinkedIn. That site lets people write recommendations of colleagues or business partners on their profile pages, but unlike on Unvarnished, LinkedIn users can accept or reject recommendations they receive. And those write-ups aren't anonymous.

But Joanna Samuels, a career counselor and recruiter, noted that references candidates present to employers are always positive. If Unvarnished were opened to a wider audience, it could be good way for employers to get broader insights about job candidates, she says.

And if that happens, employers "will use it almost like a drug test in the hiring process," predicted Dan Schawbel, a "personal branding" expert who is listed on Unvarnished with a single four-star review.

"Perception rules on the Web," Schawbel says. "If I read something negative about you, and I don't know you, I might not want to do business with you."