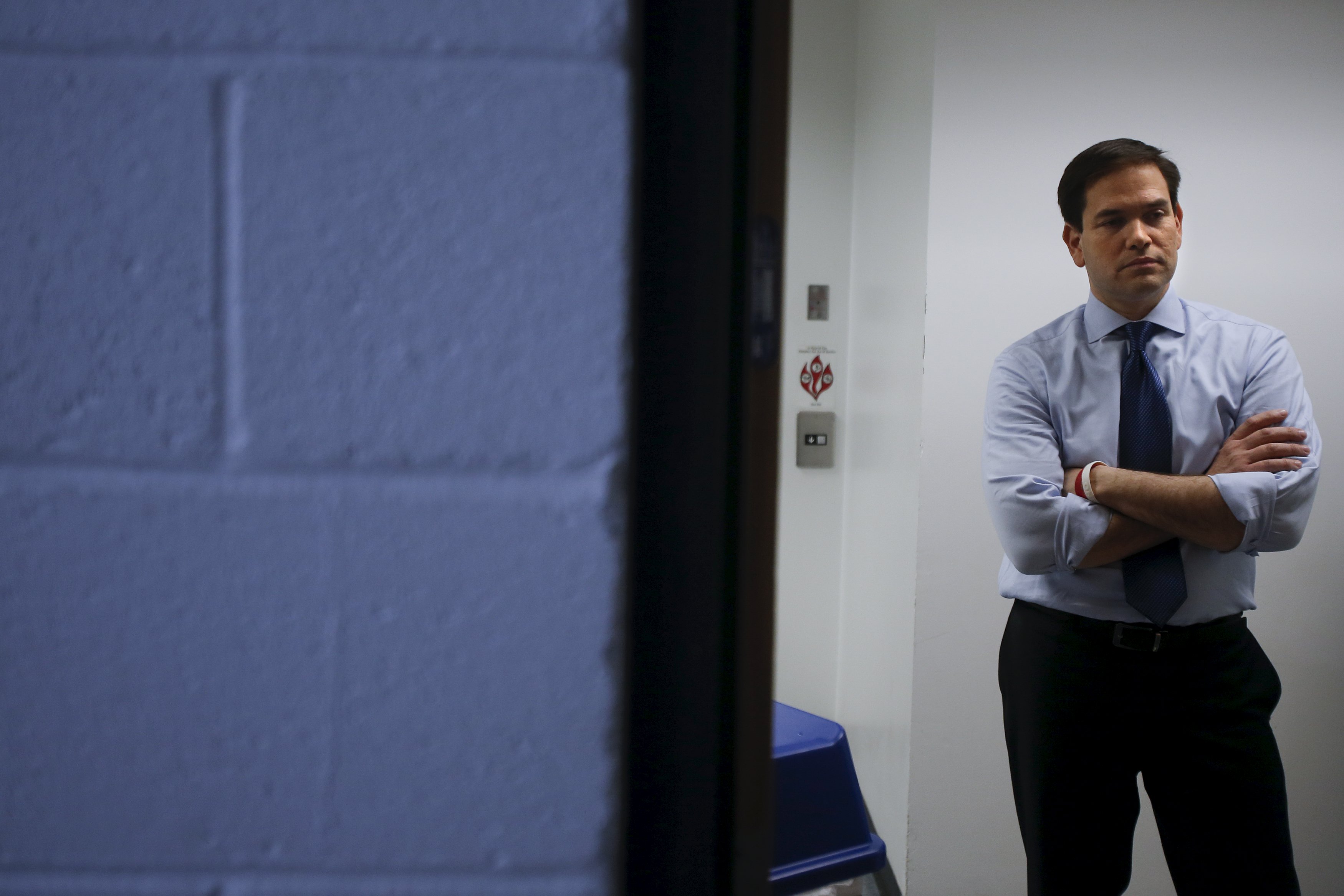 Florida Sen. Marco Rubio exited the race Tuesday night after a disappointing finish in Florida, the final nail in the coffin for the candidate who had hoped to be the rallying point for Republicans who oppose GOP front-runner Donald Trump.

As his remaining GOP rivals contemplate a post-Rubio landscape, one questions they're exploring is, where do his delegates go?

By Thursday, Rubio had amassed 164 delegates by CBS News' count -- which, when the three remaining candidates will be fighting over every single delegate between now and July, is no small figure. (Retired neurosurgeon Ben Carson also has 6 delegates, while former Florida Gov. Jeb Bush has 3.)

But Rubio can't just magically transfer his delegates to the candidate of his choice by endorsing someone else, should he choose to throw his support to one of his former rivals. In fact, at least on the first ballot at the convention, most of his delegates will still be bound to vote for him.

As things currently stand, Trump has 671 delegates, followed by Texas Sen. Ted Cruz with 401 and Ohio Gov. John Kasich with 138.

Just like the delegate allocation processes themselves, the rules governing the fate of the delegates of a candidate who's withdrawn from the race are incredibly complicated: the Republican National Committee allows the states to set their own rules on this front, so each state is different. Rubio won at least one delegate in 19 states, plus Puerto Rico and the District of Columbia, so there are a lot of state rules at play here.

Here's a guide to how the states handle this and what to expect going forward:

Some states' laws require that delegates earned by a withdrawn candidate remain bound to that candidate at the convention, regardless of whether he or she is still in the race. This is true of Rubio's 7 delegates in Iowa, 14 delegates in Georgia, 8 in Massachusetts, 12 in Oklahoma, 1 in Hawaii, 6 in North Carolina, 16 in Virginia and 9 in Arkansas.

However, the rules for how many ballots each delegates is bound for differ by state. Some, like Virginia, only bind them to Rubio on the first ballot; others require them to vote for Rubio throughout the process, no matter how many ballots it takes.

The other potential wrinkle for these delegates that are bound to Rubio is the RNC's Rule 40, a relatively obscure part of convention rules that require a candidate to have the support of a majority of delegates in eight states in order to be eligible to be nominated at the convention. Rubio won two states, Minnesota and Puerto Rico, so under current rules he wouldn't meet the criteria; however, experts caution that there's a good chance this rule could change before Republicans arrive in Cleveland this summer, so it still remains to be seen.

States where delegates can or will become unbound:

In some states, the delegates of a candidate who's left the race become unbound and are able to vote for whomever they wish. For a few of those states, this is automatic now that Rubio has exited the race; in others, he needs to formally release them for this to happen. Texas, and Kansas, for example, require Rubio to formally release his delegates before they become unbound. What's more, each state has a different standard by which Rubio's withdrawal from the race must be certified: sometimes there's paperwork to be filed by his campaign, while other states require only verbal acknowledgement.

Thus far, Rubio has given no indication of his intentions about releasing those delegates.

(In Minnesota, interestingly enough, delegates initially won by a candidate can return to them if the candidate chooses to re-enter the race. So, if Rubio were to rejoin the race for some reason, he would get his delegates back.)

States where Rubio's delegates can or will be reallocated to another candidate:

In a small handful of states where Rubio has picked up delegates, the states' rules allow for those delegates to be reallocated to other candidates ahead of the convention (all in different ways, of course).

In Alaska, when a candidate leaves the race his or her delegates are simply proportionally redistributed to the remaining candidates. In the case of this year's caucuses, Cruz earned 12 delegates, Trump earned 11 and Rubio earned 5; Rubio's will be redistributed to Cruz and Trump.

Given his interest in stopping Trump from getting to 1,237 delegates, it's unlikely that Rubio would want to re-allocate his delegates to the remaining candidates: Trump won the state with 46 percent, so he'd receive the majority of Rubio's delegates.

The battle over the delegates themselves

As the calendar progresses, the other factor to keep in mind is that delegates are not simply votes on paper for a given candidate: they're human beings who, often after one or more ballots at the convention, are free to vote for whomever they please.

This means the remaining three campaigns will be fighting fiercely where possible to ensure the people who get slated as delegates are people who support their candidate -- so once they're no longer bound they can switch over and shift the delegate tide potentially in another candidate's direction. This practice is especially critical for Cruz and Kasich, who are likely be entering the convention at a delegate disadvantage to Trump: if they're able to pick up some of his delegates on the second ballot, it could be a big boost.

Each state selects its delegates differently: in some states the candidates submit their own slates of delegates, while in others they're selected through state-level conventions during the spring. In any case, if the GOP race is headed to a contested convention those delegate slots will be more important than ever.