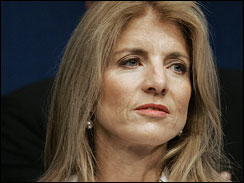 (AP Photo/Chitose Suzuki)
Caroline Kennedy let it be known Monday that she is officially seeking the appointment to fill Sen. Hillary Clinton's seat when Clinton presumably is approved as Secretary of State.

It has provoked questions about her qualifications, including this barb from Queens Congressman Gary Ackerman: "I don't know what Caroline Kennedy's qualifications are, except that she has name recognition. But so does J.Lo."

"What do you think about people who are calling into question her qualifications,'' asked Couric.

Said Greenfield: "When you look at who has served in the U.S. Senate, I can't figure out what the qualifications are."

"In fact, it's interesting that when Hillary Clinton came to New York to run for Senate, people said 'Who is she, besides the wife of the president?' Michael Bloomberg, when he ran for mayor, principally had an unlimited amount of money. He's now considered one of New York's better mayors.

Video:
A New Kennedy In The Senate?
In Caroline's case, she's never been part of any political debate -- quite deliberately, she stayed back. She must have gotten a taste for it from the (Obama) campaign,'' said Greenfield.