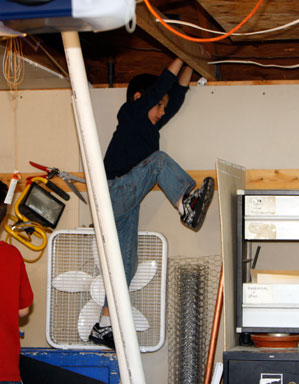 With debris from space shuttle Columbia still smoldering across Texas late Saturday, early indications were that the probe into the accident's cause would take a hard look at the spacecraft's left wing.

However, NASA associate administrator for space flight Bill Readdy said it is too early for to speculate about what destroyed the shuttle.

The first indication of a potential problem occurred minutes before 9 a.m., when there was a loss of temperature sensors on the left wing, said Ron Dittemore, the shuttle program manager.

The shuttle was at an altitude of about 203,000 feet over north-central Texas, traveling at 12,500 mph, when Mission Control lost all contact and tracking data. Readdy said the speed was equivalent to Mach 18, or 18 times the speed of sound.

During Columbia's liftoff, a piece of insulating foam from the fuel tank was believed to have hit that wing. Leroy Cain, the lead flight director in Mission Control, assured reporters Friday that engineers had concluded that any damage to the wing was considered minor and posed no safety hazard.

Dittemore said the loss of the sensors on the left wing was followed seconds later by several other problems, including a loss of tire pressure and indications of excessive structural heating.

When the shuttle reenters the earth's atmosphere, temperatures can approach nearly 3,000 degrees Fahrenheit.

"It's a fair bet that, looking at the data that they have now secured, they have a pretty good preliminary idea of at least where they need to focus the investigation," says CBS News Transportation Correspondent Bob Orr.

But beyond the data, the investigators have a very challenging problem of trying to collect the parts of the shuttle and go through forensic and metallurgic testing, to try to corroborate what their data tells them.

The debris is very badly fragmented. The pieces are very small, and spread over a couple of hundred square miles.

Retired CBS News aviation correspondent Eric Engberg, an expert on NASA who covered the Challenger tragedy, says all the videotapes taken by amateur photographers along Columbia's flight path "will be gathered up and studied frame by frame. NASA has appealed to everyone with film to get in touch with it. That film is critical."

Military satellites with infrared detectors recorded several flashes as Columbia broke apart, according to a defense official who spoke only on condition of anonymity. It was unclear whether those "spikes" of heat indicated an explosion, the burning of pieces of debris re-entering the atmosphere or something else.

Television footage showed a bright light followed by smoke plumes streaking diagonally through the sky. Debris appeared to break off into separate balls of light as it continued downward.

Unlike a plane crash, NASA won't have to look for "black boxes," says Engberg. The mission control center in Houston is itself a giant, super-sophisticated "black box." Hundreds of sensing devices on board the orbiter send radio messages to earth monitoring the health of key systems. Apparently, all this telemetry data was flowing until the disaster. This information is recorded and can provide valuable information on what happened.

Written documentation is maintained on every repair made on the shuttle. Investigators will study those records for any indication of a suspicious part or system.