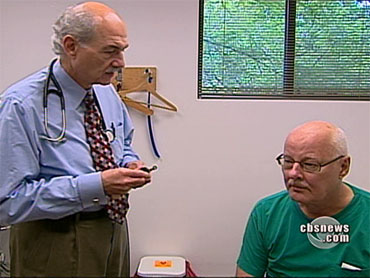 Medicare is looking like a big fat piggy bank for health care overhaul.

President Barack Obama and the Democrats want to pay for much of their plan to cover the uninsured by cutting hundreds of billions from the Medicare budget over the next 10 years.

From its inception, the health plan for seniors has been kept afloat by taxes out of workers' paychecks. Now, Medicare savings would count toward helping uninsured working-age children and grandchildren afford their own coverage.

Most seniors are willing to help younger generations. But having reached that point in life when you have to spend more time in the doctor's office than you'd prefer to, older Americans worry the cuts will mean lower quality care.

The proposed cuts to hospitals, nursing homes and other providers are bigger than any Congress has imposed since the late 1990s. However, in percentage terms, they're far from the largest ever. And Democrats are also proposing to spend tens of billions to improve Medicare prescription coverage and preventive care.

"Seniors should definitely be paying attention," said Mark McClellan, who ran Medicare under President George W. Bush. "There's some redesign, some improvements, but unquestionably there would be some adverse impacts. It's a mixed bag, but it's not like the sky is falling."

Here are some questions and answers on how the health care overhaul would affect Medicare beneficiaries:

Q: Obama says no one is talking about cutting Medicare benefits, is he mistaken?

A: He might want to add a caveat. Benefits under traditional Medicare won't be cut. But seniors who've signed up for private insurance plans through Medicare Advantage could lose valuable extra benefits, according to the Congressional Budget Office.

For years, the government has been paying the private plans more than it costs traditional Medicare to deliver similar services. The plans used the money to provide extra benefits, mainly lower copayments and deductibles. Seniors on tight budgets responded by signing up, and now nearly one-fourth of Medicare recipients are in private plans.

As Obama and the Democrats wean private plans off their subsidies, beneficiaries will suffer the consequences.

"Some beneficiaries will lose additional benefits they have been fortunate to have been receiving," said Robert Berenson, a physician turned Medicare expert at the Urban Institute public policy center. "They are likely to see higher out-of-pocket costs, and it's likely that some plans will drop out of the program."

On the other hand, everyone on Medicare will save a little on their monthly premiums as payments to private plans are scaled back.

Q: How extensive are these cuts anyway?

In dollar amounts, they're huge. They appear more manageable when viewed as a share of overall Medicare spending.

After accounting for proposed Medicare improvements, the House plan would reduce net spending on the program by $218 billion over 10 years, according to an analysis by the Kaiser Family Foundation. The Senate Finance Committee proposal would decrease net spending by $377 billion over the same period.

Kaiser found that the House cuts amount to 3 percent of projected Medicare spending from 2010-2019, while the Senate reductions are about 5 percent. By comparison, the 1997 balanced budget bill passed by a Republican Congress and signed into law by then-Democratic President Bill Clinton reduced Medicare spending by 12 percent over 10 years.

Research indicates that as much as 30 percent of Medicare spending goes for services that are of questionable value to patients.

Q: With all these cuts, how can Obama claim he's improving benefits?

A: By offering cheaper prescription drugs.

Under a deal with the White House, drugmakers would offer a 50 percent discount on brand-name prescriptions for beneficiaries who fall into the "doughnut hole," the notorious Medicare coverage gap. House Democrats want to eliminate the doughnut hole by 2023, but drug industry opposition may thwart them.

Coverage for preventive care would also get better.

"When you look at the improvements in traditional Medicare filling the doughnut hole, free prevention, help for low-income seniors I think all of those things narrow the gap between what Medicare Advantage has been providing and what traditional Medicare provides," said John Rother, top strategist for AARP. "In effect, they are improving the benefit for everyone."

Q: I keep hearing that Congress wants Medicare to pay for quality, not quantity. What does the legislation say?

A: The bills would launch several experiments to reorganize how doctors and hospitals care for patients, particularly seniors with chronic illnesses. If the tests work, lessons could be rapidly adopted throughout Medicare. Two major ones deal with "medical homes" and "accountable care organizations." Here's the background:

Seniors with several chronic illnesses see many different doctors a year, and juggle dozens of prescriptions. If they had a "medical home," a general practice doctor would take on the role of patient advocate and care coordinator. That could be as basic as ensuring one specialist doesn't recommend medication that reacts against a drug another doctor has prescribed unintentionally sending the patient to the emergency room.

An "accountable care organization" is a network of hospitals, nursing homes, doctors' offices and other providers who work together to provide the best possible care, while trying to operate efficiently and hold down costs. Models include Minnesota's Mayo Clinic and Intermountain Healthcare in Utah.

Lawmakers will be looking carefully to see how beneficiaries and providers in their home states are affected by the proposals.

More changes are in store in coming years. For Baby Boomers, it may not look a whole lot like grandma's Medicare.