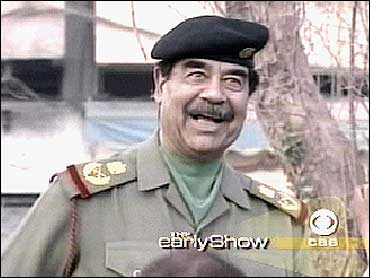 If U.S. forces capture Saddam Hussein, his prospects would be bleak: intense interrogation, an austere prison cell, a trial for war crimes and perhaps an execution.

American special operations forces — as well as coalition troops and anti-Saddam Iraqis — are searching for the former Iraqi president who survived attacks during the war meant to kill him. Last week, American forces caught up with Saddam's sons, Odai and Qusai, and they were killed in the ensuing gunbattle.

The deposed dictator has so far evaded capture, though several others of his inner circle have been apprehended or killed. Several audiotapes have surfaced of a man purporting to be Saddam inciting attacks on U.S. forces — and CIA experts say many of the tapes probably do carry Saddam's voice.

American officials acknowledge that some Saddam loyalists are emboldened to attack U.S. forces because their former leader remains at large. His capture would be trumpeted.

Some experts in international law suggest the Bush administration is making a mistake by ruling out an international tribunal to prosecute Saddam and his inner circle. Having Saddam tried by courts controlled by the United States — or an Iraqi government seen as a U.S. puppet — could prompt more anti-American feeling in the country, they say.

"If the process that unfolds in Iraq is one where it's railroad justice and a summary execution, the U.S. can't just look at that and say, 'We wish they had done it differently,"' said Sean Murphy, an associate law professor at George Washington University.

"The reality is, we're complicit in it. If it's not done right, it will taint the United States."

"The past abuses will be (tried) through an Iraqi-led process. We believe that it must have some indigenous roots in order to reinstate the rule of law," Pierre-Richard Prosper, the State Department's ambassador-at-large for war crimes issues, said at a Pentagon news briefing in April.

Either the U.S. or Iraqi systems would be able to mete out punishments up to and including the death penalty, Prosper said.

If Saddam is captured, his location might well be kept secret to prevent attempts to free him. He would most likely be held in Iraq, possibly at the high-security prison camp near Baghdad's international airport where other most-wanted Iraqis are being held, officials suggest.

Defense Secretary Donald H. Rumsfeld and other Pentagon officials have said they have no plans to take Saddam or any other Iraqi prisoners to the U.S. Navy base on Guantanamo Bay, Cuba, where more than 600 terrorist suspects from Afghanistan and other countries are being held.

Wherever he might be held, U.S. interrogators would try to persuade Saddam to tell what he knows about the whereabouts of other officials in his government and any weapons of mass destruction. American forces have found no chemical or biological weapons in Iraq, despite President Bush's assertions before the war that Saddam had such weapons and was bent on making more.

American officials say they are treating all Iraqi prisoners humanely — giving them adequate food and water, exercise and medical care. Still, prison would be a big step down for Saddam, who during his reign had dozens of marble-lined palaces and the best of anything Iraqi oil money could buy.

Eventually, Saddam would be put on trial. The first prosecution could be by an American panel — either a military court-martial, a special military commission or a federal court. U.S. officials have not decided what kind of court would try Iraqi war crimes suspects.

Under a doctrine called command responsibility, Saddam could be held responsible for atrocities committed by Iraqi forces even if he didn't specifically order them.

The interim Iraqi governing council said this month it plans to set up a system to try former members of Saddam's government for crimes against the Iraqi people. Human rights groups estimate that hundreds of thousands of Iraqis died during Saddam's more than two decades in power.

Charges against Saddam could include crimes against humanity for a 1988 campaign against Iraqi Kurds in which thousands died from chemical weapons and other fighting, as well as a brutal 1991 crackdown on Shiite Muslims in Iraq's south after anti-Saddam uprisings following the first Gulf War.

U.S. military teams have been gathering evidence of war crimes since the war began in March. American and Kuwaiti investigators also have worked to document alleged war crimes during Iraq's 1990 invasion and occupation of Kuwait.

International human rights groups and Iraqis have been gathering evidence of other crimes against Iraq's population, though Iraqis' desperate searches for the remains of their loved ones in mass graves have destroyed some evidence.