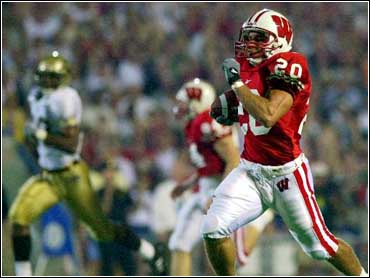 Wisconsin receiver Chris Chambers could be out until the end of September with a stress fracture in his right foot. That might not be such a bad deal for the Badgers.

An NCAA official said Friday it will be up the university to decide whether Chambers can serve his three-game suspension for receiving unadvertised discounts at a shoe store while sidelined with the injury.

"We're not going to try to determine to what degree they're injured," NCAA spokesman Wally Renfro said. "The health of a student-athlete is between the student-athlete and the school."

Chambers is one of 26 football players suspended for one to three games by the NCAA on Thursday for breaking rules on extra benefits and receiving discounts at The Shoe Box.

The university also has to figure out how to mete out the punishments over the next three games after the NCAA gave the school a four-week window to finish the suspensions.

Eleven players were ordered to sit out three games, while 15 received one-game suspensions they will have to serve over a stretch of the Badgers' schedule that includes games against Oregon next Saturday, Cincinnati on Sept. 16 and Northwestern on Sept. 23.

"Once things like that happen, a team has to come together. That's all we have to do. Come together and play with what we've got," said starting running back Michael Bennett, who received a one-game suspension and was "shocked about the whole situation."

Wisconsin spokesman Steve Malchow said the coaching staff will make game-time decisions each of the next three weeks on who will sit out each game.

And associate athletic director Vince Sweeney said the university was still deciding whether to allow Chambers to serve his suspension while injured.

"This would be a new situation for us," he said. "We want to make sure everything we do is in accordance with what they want us to do."

The NCAA earlier this week initially declared 81 fall athletes ineligible because of the violations, but the school reduced the number of suspensions to 26 through an appeals process. Still, all 81 will have to pay back the discounts they received from the store through donations to charity.

In addition to the 26 suspended players, another 22 Wisconsin athletes were ordered to perform 24 hours of community service. A deadline has not been set to fulfill the comunity service requirement, Sweeney said.

The players were disciplined for breaking NCAA rules prohibiting them from receiving extra benefits from the university or its representatives and provisions banning special discounts or credits on a purchase or service.

Shoe Box owner Steve Schmitt qualifies as a school booster under NCAA guidelines because he owns men's basketball season tickets and has donated money to the university.

Coach Barry Alvarez joked sarcastically the only way to watch out over player was to baby-sit them, shop with them and check out the prices they pay.

"People need to understand that there was no intent to do any wrong, I believe that," Alvarez said. "They did not get free shoes think it's important to understand that. They went to a discount store and bought shoes at a discount. Obviously, the NCAA saw it differently."

Wisconsin is already on NCAA probation until the end of November after committing a major rules infraction when coaches and staff members received reimbursement for expenses from a boosters fund without approval from the chancellor.

Sweeney said it was too early to tell whether the latest infractions would impact the university's probation. He said school officials still need to determine whether any winter or spring athletes should be disciplined for the discounts they received from The Shoe Box before making a final report to the NCAA. He said the process could take several months.