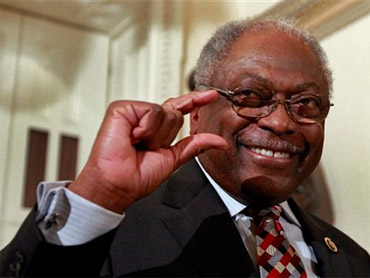 Next week's Democratic leadership elections will be a lot like musical chairs.

Speaker Nancy Pelosi's decision to stay in the top Democratic slot, just in the minority, puts her lieutenants in a very uncomfortable bind. Someone has to be voted off the island.

Both majority leader Steny Hoyer (D-MD) and majority whip James Clyburn (D-SC) are deep in a fight for the second most powerful Democratic position - minority whip. If the Speaker had bowed out of leadership, Hoyer would presumably be minority leader and Clyburn would remain whip, but both are now vying for the number two position.

Rep. John Larson (D-CT) is trying to keep his job as chair of the Democratic Caucus and Rep. Xavier Becerra (D-CA) wants to stay vice-chair.

And that's all there is.

So at this point, Clyburn or Hoyer will be out. No office in the Capitol building. No security detail. No seat at the top Democratic table.

Unless Clyburn and Hoyer can make some kind of deal.

Democratic aides say that Hoyer - who just announced his leadership bid today - is likely trying to get Clyburn to bow out before the leadership election. Which explains why Hoyer spent the weekend publicizing endorsements from liberal and moderate wings of the Democratic caucus.

A source close to Hoyer says they're confident Hoyer has the votes.

But Clyburn doesn't spook so easily. "He's in the whip race" insists a Clyburn aide. "If Hoyer had the votes why would he be pushing so hard for a deal?"

The aide argued that Clyburn's base within the Democratic Caucus includes the Congressional Black and Hispanic Caucuses and progressives, a larger base than Hoyer's fiscal conservatives and moderates.

One Democratic strategist warned that leaders should be wary about pre-ordaining leadership before members have a chance to vote. "I'm not sure if you march the same leadership out that there won't be pushback," he said.

There has already been some pushback from Rep. Jesse Jackson Jr. (D-IL). He put out a statement today saying that "the Hoyer/Clyburn debate over 'a' job in the Congressional minority, seems to continue to miss the message of 'jobs for all' that both Mr. Hoyer and Mr. Clyburn were elected to fulfill by their constituents in this year's election."

Jackson added that "infighting is definitely not the road to a majority in 2012."

As for Speaker Pelosi, she's neutral on the matter, according to aides. That's despite endorsing Hoyer's majority leader opponent, John Murtha (D-PA), for the majority leader post four years ago.